Bangkok has some excellent public transport, at least great fun if you’re a tourist. There are several canals with super-fast water buses on them, you quickly leap on, pay them 5 baht (about 7 pence) and they zoom much faster than the jammed traffic. There are canvas shields which raise and lower along the side to reduce splashing, although you still get a bit wet with all the wakes it causes. Under some bridges they have to lower the entire roof, and the young lads clinging to the outside who collect your fare duck down. 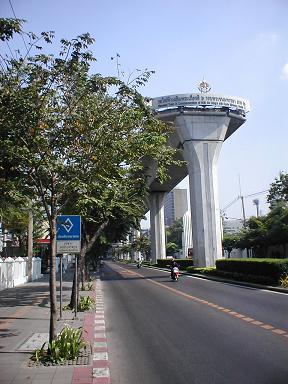 More hightech, like something from a manga movie are the sky trains. Vastly healthier than an underground would be, if a bit pricey compared to water and land buses (more like 30 baht a trip). The picture is of the start of one of the sky rails, they zoom along several stories in the air usually in the middle of a dual carriageway. They work exactly like the underground, you buy a ticket which gets used in an automatic barrier, and there are similar maps. You just go up an escalator before getting on rather than down, and it’s sunny and light on the station platform. Very clean and well managed, I wasn’t allowed to take an ice cream in, had to finish it first. Between stations you get beautiful views of the city, and feel like you are flying.

Despite already having this system straight from a futuristic Japanese city, for some reason a Bangkok underground is being built as well. There are only two sky train lines, and they don’t cover the city comprehensively, but nor will the initial underground. I’d much rather they built sky trains everywhere.

The picture? Oh yes, I found a shop which converted my digital camera pictures into a CD, which I can now use in internet cafes, and post back to the UK for backup. I’m not sure if the picture will work if you’re reading this by email subscription, you might have to go to the web site to see it.

More technical details for those who are interested: I found an internet cafe with Windows XP, so that I can easily look at the jpegs using the built in slideshow, and resize them with the built in Paint. I upload the pictures using Blogger Pro (the version of blogger which you pay for) – it gives a browser interface for file uploads to your blog.