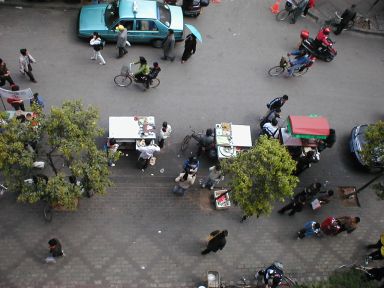 I’ve been in Kunming for three weeks now, and it’s a pleasant place to live. I’m studying at the Center of Chinese for Foreign Students Yunnan University. The university is very eminent for a place so remote from Beijing. This is because during the Cultural Revolution lots of academics either fled or were exiled here. I’m also staying in university accommodation, although I upgraded my room to one more like a hotel than a student room. The first two pictures are views from my window.

You can see the street sellers who hang out from daybreak until eleven in the evening, with time off in the late morning and afternoon. I buy my breakfast there just before dashing to class at 8am. There is a choice of:

The cost of a decent breakfast is about 15p, although I am getting a bit tired of it now and have bananas more often. 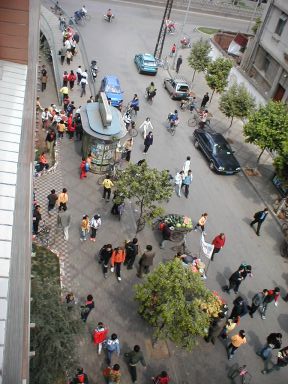 Sometimes the peaceful hum of students in Kunming is distrubed by arguments. Quite what these are about I don’t know, but they have a certain brutality to them, and seem contrary to the Chinese culture of not losing face. Once I was woken up by a street seller shouting, haranging an old white-haired man. Another seller was holding him back as he tried to attack her. The old man grabbed and shook one of the trees by the stalls, until he eventually calmed down and lurked just down the road. Another street seller argument a few days later was I guess turf war one, I’m not sure how slots for selling are allocated.

Another time, outside the window I spotted a man running out of the university entrance across the road. This is most unusual, as you don’t see many joggers, and he was sprinting. Two uniformed guards (there are guardmen everywhere) sprinted out after him, followed by a whole miscellaneous crowd of people. The victim dashed under the pedestrian bridge and out of my view along the road, and over the next minute about 20 or 30 people came out to follow. Some were students, some old, some young, some well dressed, some not. Shortly the two guards came back with the captive, and took him into their office at the entrance to the university. The crowd lurked outside for sometime, but the guards wouldn’t let them in. The people seemed more angry than curious, but hung about for so long they must have had some stake in things.

Round the corner down the road there was a fourth incident. A women was screaming and shouting, really angry, kicking at a man who I can only presume was a thief. He was being held by two other men. The scene was rough, the thief struggling and lurching round the pavement, clutching something, perhaps her bag. A few people were stopping to watch, and I quickly hurried on. 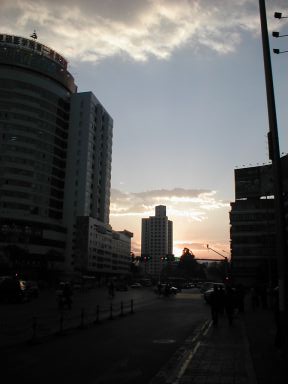 Kunming is in its way quite beautiful. This is partly because it is outside the tropics, so you sometimes find real fluffy white clouds, and the sun actually takes a while to set. The weather reminds me of home, it’s even quite unpredictable. There are huge skyscrapers, drummed into the landscape to show that China’s economy is flourishing. Most of them house banks, there seem to be an infinite number of banks. These have a strange appeal to me after so long in the relative poverty of SE Asia. Energy, life, action, human strength. Kunming also has some actual beautiful places, such as parks and zoos, and places out of town in the mountains. Well, these are often beautiful only by Chinese standards of tourism, which are quite clinical like a painting drawn by an engineer.

There’s a school just down the alleyway where I live, and the day before yesterday on my way out to upload these digital photos a whole horde of children were coming out. With hardly an exception they all shouted “Hello!” to me, until I couldn’t help but grin. It’s not like there’s a shortage of foreigners here, they must be doing this all the time!

After being on the move for three months, it’s interesting to observe how my behaviour changes when I’m in one place. Days are thrown away much more readily, with the feeling that there’s an endless supply of them left. I’ve reacquired the strange concept of the “weekend”, when I head off on day trips to tourist attractions nearby. 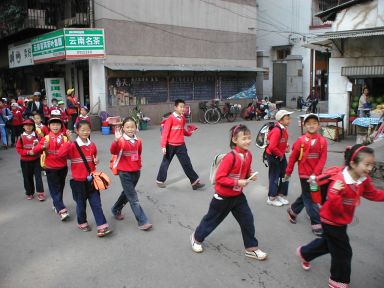