It is an atomic bomb. It is a harnessing of the basic power of the universe. The force from which the sun draws its power has been loosed against those who brought war to the Far East. – President Truman, announcement on Hiroshima 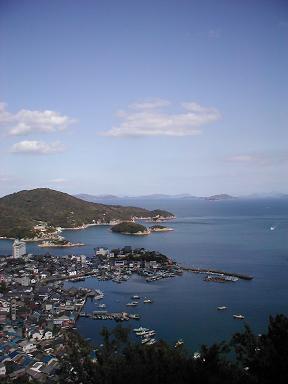 Japan has a sea with no waves, where only narrow connections to the vast Pacific add salt and stop us calling it a lake. It’s an enchanting place, the distinctive shape of the islands a familiar romantic myth from much Japanese art. Rosemary and I spent much of last week travelling from Kansai along the north coast of the sea to Hiroshima and back. This picture is taken from a hillside temple at the fishing port of Tomo no Ura; it gives a good feel for the dramatic but cosy views across the sea in the sun. Even better was the Sete Ohashi bridge which we crossed on a day trip to Takamatsu. It was a dreadful foggy day, and all we could see from the train was white mist with peaks of the islands coming in and out of view. Only seeing the tops made them all the more mystical in shape.

It’s tricky to go to Hiroshima without visiting the peace park and museum there, if only to try and convince your brain that this thriving city really was wiped out less than 60 years ago. I spent several hours looking at models of the city before and after the first atom bomb strike, reading to what degree and at what range buildings were destroyed by the heat blast, and studying in too much detail how people were damaged both with immediate death, and long term radiation sickness in those who went to help the injured. Nevertheless, standing near ground zero in the peaceful sunlight, my senses were unable to believe what my mind knows it once looked like.

I’ve grown up with the existence of atomic bombs, and so hadn’t realised before just what a dramatic, surprising and omnipotent-seeming move their first deployment was. The research project which created the bomb was in secret, and the one test run had taken place only three weeks before, also in secret. For this was the phrase “shock and awe” really made. The Japanese did not know what it was, until they found completely exposed X-ray film in the sealed vault of a hospital. Terrifyingly this bomb is but a mere trifle compared to those with which we are armed today. 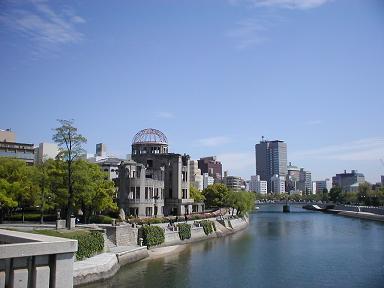 The politcally correct question to debate at this point is whether the US was justified in using it. This is besides the point – the functioning of the war machine of a country made its use inevitable. One argument goes that ending the war quickly and with less total loss of life was the motive, but I feel that was just a side issue. More important was to test this new device in real action, and to show the world just how strong the US had become. Would any functioning military, a structure by its very nature designed to kill, surprise, shock and awe, really have missed this opportunity? Was the Rape of Nanking by Japanese occupying forces a few years earlier, which needlessly tortured and killed perhaps the same number of civilians as the bomb, less or more evil for using only conventional technology?

The inevitability of the US using their new device does not justify the action but it does explain it. It shows that in order to stop such things happening again more extreme measures are needed than just protesting “they should never have used it!”. Measures that affect how all wars are fought, and the very motive force of all armies.

The bomb also had a useful geopolitical function, giving Japan to America rather than to Russia, who may have claimed it had the war continued. With those terrifying reds of the USSR and China so close by its defense served the US well during the cold war, and continues to do so. Sometimes as I walk past Starbucks in modern Japanese cities I think of Japan as simply a large US naval base, albeit one with the richest of artistic heritages for its very own.

One thought on “Inland Sea and Hiroshima”