I’ve spent the last few days touristing, and have now met up with a new travelling companion, my mum. We’re journeying round Japan together for four weeks. I’ve added a couple of pictures to the last few posts, and here are a few more. The photo to the left is of a Buddhist graveyard on Koyasan mountain. People are interred here to await the return of Maitreya, the Buddha of the future, buried in poll position next to one of his mates. The grave stones were different from a Christian cemetery with more curves, spheres and posts. But the feel of the place was still the same, a purpose to respect and mourn the dead. 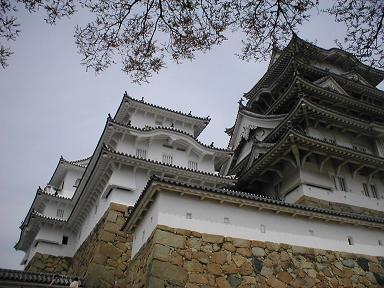 Himeji Castle is also artistically completely different to a European castle, but in function and technology much the same. As you can see from the picture it looks a lot cosier than medieval Britain, although this impression is partly because the wooden floors and plaster facades have been preserved. The roofs and walls have more beautiful curves and intricate tiling, and the overall shape of the building is more grand and inviting than harsh and brute. However, just the same vicious traps lie within, including holes for pouring boiling oil on invaders, and special wooden egresses for arrows.