Photos courtesy of Ben, who spent the evening taking zillions of snaps. Thank you! 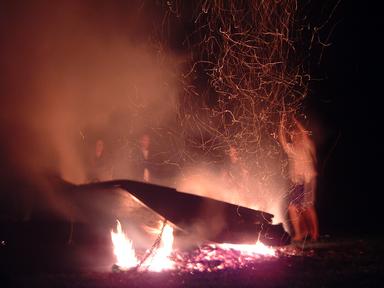 On Saturday I went to a curious and quasi-pagan event at Granchester. Some Trinity puntspeople had the desire to dispose of an old warn out punt. I got there quite early with some friends and spent a while drinking beer, walking up and down the river waiting for the punts to arrive, watching the sunset. There were couples lighting barbecues along the bank, and even someone camping. Eventually a small flotilla turned up, packed with people from the smaller punting companies and syndicates. And petrol.

The Cambridge punt world is a microcosm of global capitalism at work. Or at least this is how it was described to me. The vast corporate conglomerate is the inocuous Scudamores, who much to my surprise turn out to be scourge of the world, partaking in dirty tricks to make BA envious. They have a couple of smaller commercial competitors, and there is even the equivalent of a government run or perhaps newly privatised enterprise, in the form of Trinity punts, connected to the university college. At the smaller end are the “mobilers”, a group of self-employed people who each own their own punt. They formed a syndicate, touting for business on each others behalf, sharing profits, and getting their name from the mobile phones used to organise it all.

I’ll briefly describe two of the tricks that Scudamores have got up to, to preserve their power. The first tale is from the distant past, and no doubt much blurred by the time it reaches this retelling. Scudamores were deceived by an employee into selling some of their old punts to him, and he set up a new punt business to compete against them. In revenge, and in order to stop him working, Scudamores deliberately sank a large number of their own punts all round his, to blockade them in and so prevent him from working. Since they have such a large fleet they could continue to operate, eventually forcing him out of business. Then they recovered their sunken punts, and resumed using them.

More recently, the mobilers were starting to compete too efficiently with Scudarmores. Was their belief in capitalism and the free market so strong that they accepted this new threat with a stern face, and proceeded to make themselves more efficient, offering higher quality tours and more effective punt repair sechedules? Not exactly. They have sufficient capital that they could invest in paying some of their staff to go on “bastard duty”. This splendid job, paid an hourly rate of six pounds, involved following the mobilers all day and harassing them. When they’re talking to a potential customer, the bastard would go up and shout “Nuuuahhh!” very loudly to put them off. Should someone decide to buy a river tour despite this chicanery, the Scudamore’s bastard would immediately offer the same tour at half the price, even if it would make them a loss.

Needless to say the mobilers’ business wasn’t going so well with this new hazard. They complained to Scudamores, who signed a deal with them, agreeing to cancel bastard duty. What did the mobilers have to do in return? Agree never to employ anyone solely to tout for business, and agree never to stack up multiple parties in one punt tour. Both measures mean they can never grow their collective business, so never seriously compete with Scudamores. This outcome is so self-evidently fair that my faith in the beauty and purity of the free market is fully restored.

And the burning? The riverfolk were reassuringly bad at setting fire to their means of production. Clearly drunk, they put the punt, drenched with days of recent rain and sitting in the river, upsidedown and poured petrol on it. When lit it formed a spectucular fan of flames leaping many feet into the air. Alas it simply went out, the wood barely even noticed. We had to have a whip round for another can of petrol.

One thought on “Burning Punts”