Two emperors, roughly 2000 years ago, supervised the creation of their own burial treasures before they died. One (called Qin Shi Huang) created an entire pottery army, in formation, with infantry, cavalry, chariots, archers and a command section. The other (called in various places Han Jing, Liu Qi, or Jindi, I can’t quite work out his name) created pigs, horses, goats, carts, pots, peasants, managers of food supply and representations of judicial functions. Han Jing the yin to Qin Shi’s yang. Which would you take? 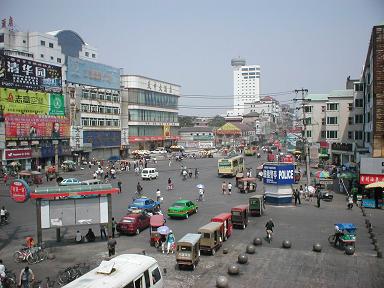 Rosemary and I have just taken a lolloping rail route from Shanghai round past the Yellow river in northern China. We passed through Kaifeng – still with bicycles, men playing chess, puppy dogs for sale in the street in cages, OK tourist attractions. The photo of the square by day above, after dark turns into a night market, with hundreds of food stalls selling freshly grilled kebabs, stir frys, geletinous desserts from elephant kettles, freshly rolled filled pastas and thousands of people.

Then Luoyang. In the cliffs of a river near Luoyang, Buddhist emperors and empresses had Buddhas as high as 15 story buildings carved deep into the face of the rock. The photo on the left below is of the river Yi nearby, and the photo on the right of a Heavenly Warrior. Bigger than he looks, 15m tall I think. 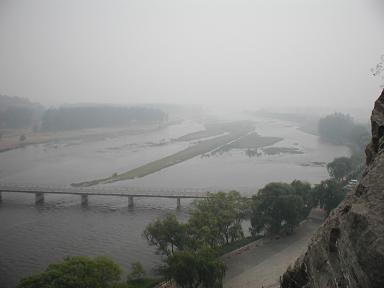 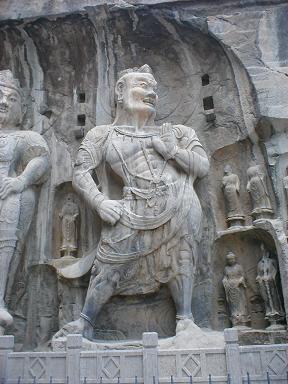 We’re in Xi’an at the moment, site of numerous ancient capitals of China. It’s in terms of development all that I had expected Shanghai would be. It feels wealthy, with valuable cars. But it’s also just that bit cleaner, and more relaxed than Shanghai. Bell Tower Square at night feels like an evening square in Italy, well dressed people enjoying the balmy night. The old city walls are still complete, and together with the gardens where the moat used to be form both a landmark and a sense of space.

“These tiles are clean! I wonder if the plaza there pays for them to be scrubbed every day?” “Oh no, it’s because they’re brand new, look even though it’s the evening, the workmen are still laying them.” I was shy about photographing them, but once I did they all started posing with their shovels (photo below left). It looked somewhat ad hoc.

It seems that if you dig a hole more than few metres deep, you’ll stumble upon buried treasure anywhere in Shaanxi province. The cute little lamb on the right is a couple of thousand years old, and was recently found by the Xian Lightbulb Corporation during construction of a new building. 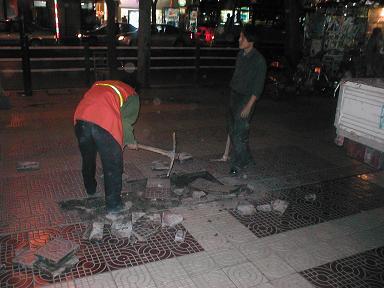 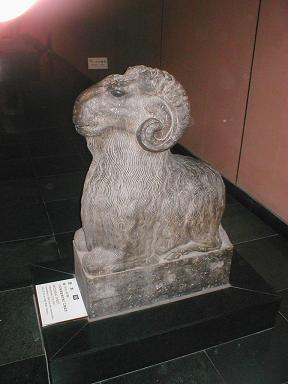 And those two emperors, planning for their afterlives?

The famous Terracota Warriors, found accidentally by peasants digging a well in the mid 1970s, were the treasures of the first yang emperor, Qin Shi. Well worth going to – make sure you see the movie there, which was filmed with a 360 degree camera and gives more useful historical information than the broken English signs. The surprise hit (found via the most recent Lonely Planet, and only discovered at all in the early 1990s) is Han Yangling, the mausoleum of the second emperor, Han Jing. It’s in many ways more fascinating than the Warriors. Much less busy, with time and space to linger. Glass floors going above burial pits, you can see the excavations of all the animals and people close up.

It’s difficult to decide which emperor I’d follow while preparing my afterlife. It’s much more in my character to follow Han Jing, and take enough peasants, animals, equipment and administrative functions to form a new civislisation. But, alas, I know that Qin Shi’s pottery invasion force would plunder it all as soon as we got there. So, on balance, I’d have to defect in this prisoner’s dilemma, and take the army.