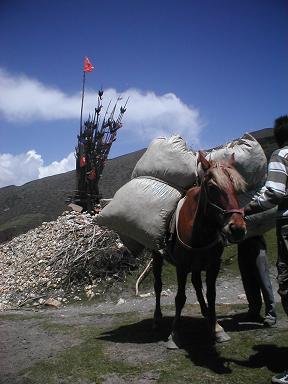 At the moment I’m in Tibet.

No, I don’t mean the Tibetan Autonomous Region (TAR), I mean historic and ethnic Tibet. TAR is the province occupied by China which contains Lhasa, and which we lazily often refer to as “Tibet” in English. Tibet proper also includes all of Qinghai province, and parts of several other Chinese provinces. Tibetan people making a political point refer to themselves as living in Tibet, even if they don’t live in TAR. As a tourist this is good news – it is much easier to visit the non-TAR parts of Tibet, than suffer the complex web of permits and travel restrictions in TAR itself.

I took an all day bus ride north of Chengdu, a dramatic drive up into the mountains along a river lined with electrical pylons and filled with dam after dam, arriving in Songpan (population 70,000). Immediately the contrast with large Chinese cities was clear. It is nestled amongst low green mountains, with old city walls still giving it shape. I felt immediately much happier.

The thing to do in Songpan is to go horse trekking, which basically means a 3 day hike with camping, only all the uphill bits you sit on a horse. It’s too dangerous on steep downhill parts. This is hard work, back or knees aching after 6 hours riding in a day. Guides did all the real hard work, like erect tents and cook us dinner. The photo (right) is of a horse loaded up with feed, near a Tibetan prayer for peace, which involves putting arrows on the top of hills and mountains.

On the way we saw a Tibetan prayer water wheel (photo below). A small stream was channeled by rocks into a thin open pipe, where it landed on a simple and inefficient water wheel. This was housed in a little hut, and spun a prayer wheel. That, in turn, was octagonal, and had a chant written round it in the Tibetan alphabet. I assume that the idea, which is slightly mad if quite sweet and fun, is that by this means the river says your prayers for you. 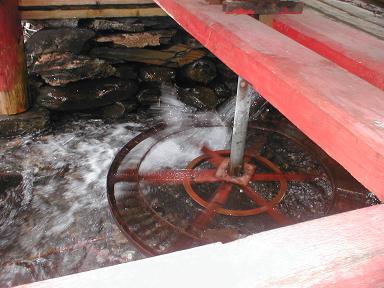