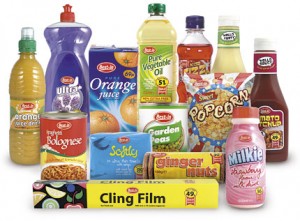 At mySociety‘s annual retreat I gave a lightning talk about how I’ve come to realise that products and markets are the same thing. I’d originally intended it to be a blog post, so here you are.

It’s a story of geeks learning.

What is a product?

It really is magic.

Before the invention of products (whatever that means!) you had to make bespoke things. You want a tool, you have to bash the rocks together to make your own custom tool.

What’s magic about industrialisation, or copying computer software, is that you can design something once and lots of people benefit from it. The design, which is to say the finding of that commonality of use, becomes much more expensive.

Fred Brooks in the Mythical Man Month describes this for computer software.

A Program is the object an individual uses in estimating productivity, it is ready to run in the programmer’s environment.

The Product can be tested, repaired and extended by anybody, is usable in many environments for many sets of data. It is generalized and documented, and costs at least 3 times more than a Program for the same functionality.

I wrote earlier in the year about how “geeks are now good at usability”. What I really mean is that there is now a reasonably strong culture of making quality products. Ones that are designed for purpose of the user rather than the creator. Ones that are cohesive and well made.

We’re in an exciting place right now – new IT products are changing the world in fundamental ways. It’s like the turbulent century after the invention of the printing press, the new rules aren’t clear yet.

A market is the people who use a product. Or, to put it only slightly more indirectly, it is the route by which people come to know about and use a product. This is where the meaning of product and market blur. 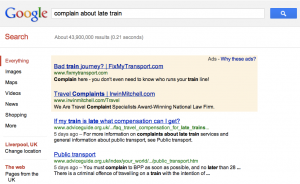 Look at the Google search screen shot to the right (click to make it larger), for “complain about late train”. As you can see there is an advert “Bad train journey?” for the website FixMyTransport.

My question – is that Google search result part of the product or the market?

To a nerd who has just built FixMyTransport, it is clearly advertising. Part of the sales and marketing process, surely! In contrast, a general user on the Internet is barely aware that Google and FixMyTransport are separate things. They just know you type stuff into a box, it takes you to something that does what you need. For them, the Google search result is a vital part of the product – the first menu in the user interface for it. 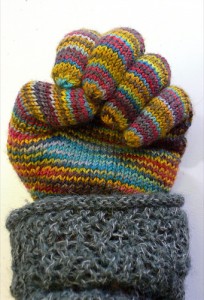 Are products and markets the same thing?

Like a hand and a glove, product and market mesh together. If you alter the product, its market automatically changes. You can design a product without thinking about its market, but to do so is merely ignorance. There is a market that you are making, you are just not thinking about what it is.

The marketing of a product is part of it. A Google search result is part of a user’s experience of FixMyStreet. The feel-good brand advertising of Coca Cola is vital to people enjoying its taste. Ubiquitous Apple stores both sell Macs and make it obvious where to get them fixed (“whole product”). The more you look at it, the harder it is to tell which is product and which is market.

My analogies of gloves and skulls are a bit too glib. If you know about biology, a stronger analogy is perhaps one to genotypes and phenotypes. Our genes are analogous to the product. They express themselves, creating an organism. The product comes into existence, and naturally creates a market. Just as it is hard to predict what organism will come from the genes without running an experiment, it is hard to predict exactly what market a given product will create. You can research it a bit, and try and guess, but ultimately you have to do a minimal test to see.

That’s what all the lean startup stuff is about.

Geeks used to just be getting their technology to work at all. The usability revolution of the 1990s, which has now to a large extent played out, made them start to think about what they make as a product for ordinary people. Now, there is a marketing revolution of the 2000s. Geeks are starting to think about marketing as a vital part of what they make.

The obvious expression of that is the way the hackers at Facebook use the same skills that used to be used to write compilers, to instead optimise the growth of their market, and the fit of their product to it. Put like that it is slightly creepy… And yet, it is making stuff you like to use, right?

Products. Markets. You’ll go better if you think of them as one.