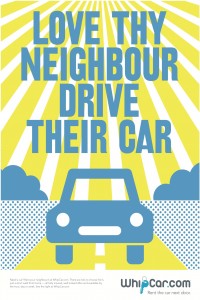 It’s as if your best friend had suddenly died and nobody would tell you how.

This time the afflicted isn’t a person, but a startup called WhipCar.

The idea of WhipCar… Rent your car out for the odd day or weekend to your neighbour to cover its vast cost. Or, if you don’t own a car, rent your neighbour’s car more cheaply and easily than a hire car.

It’s a genius idea, the Internet enabling us all to share our capital resources. The Economist had a whole piece just last week about that, including WhipCar.

There’s a meaningless statistic used a lot in Silicon Valley – 9 out of 10 startups fail. That said, for startups that haven’t reached product/market fit, it’s a statistic that often feels true. My world is littered with the corpses, or more often comatose bodies, of competitors/partners (it’s hard to tell the difference) that I once let myself get emotionally excited about.

(I’m not linking to them, because it isn’t always clear. My one consolatory love about how WhipCar is shutting down, is how clear they’re being about it)

So why are they in their death throws? This is what they say.

Meh! Barriers! I’ll see your barrier, and raise it one community desperate for new ideas like WhipCar to succeed.

There are four things that could have happened.

In each case, I’d love a little bit more from Vinay Gupta, the charismatic, amiable, tenacious founder of  WhipCar (don’t confuse him with the other Vinay Gupta, inventor of the Hexayurt).

Here’s how it would work:

1. Not enough customers, well tell us then! There’s no reason not to if you’re about to shut down the company. Open up your marketing figures for us all to see. Does one side of the market need a cultural change? Write it up! At the very least, anyone else planning a similar startup will have much better information to come up with a way through it. At best, somebody right now will work out how to help WhipCar get an initial viable market – with a Spread Firefox-like crowd marketing campaign, or a new demographic you never dreamed of.

2. Fundamentally not enough revenue for the business model to be viable… Again, open up your books! Why not, you’re about to destroy the company! Explain to your customers why there isn’t enough revenue. Perhaps you can increase prices with their support, or they can help with cost savings in a way you haven’t imagined. If not, at least it’s documented for business schools and future entrepreneurs what doesn’t work.

3. Lack of capital. Here I mean fundamentally lack of capital – growth and revenue figures which if you plot on a graph, end up with a viable business. It just has negative cash for a while. This is the most unbelievably easy one – open up all your books, and do a crowd funding round. If you don’t think one is legal in the UK, I know a lawyer who can help, or you can go to the US where crowdfunding is now legal.

All the above might sound a bit mad. Is it really the job of the customers of a company to help it exist?

Oh yes, oh yes it is. Bringing a new product to a new market is an incredibly difficult thing to do. WhipCar got really far – it managed to largely fix the insurance difficulty in its model, and had at least a reasonable number of paying customers.

There are lots of people who want WhipCar, or something like it, to succeed. It’s ideological. We want it to be easier to not have to own a car, and easier to share use of that carbon-intensive to make capital resource that is a car.

There are literally a zillion geeks who would help. We’re pretty worried about climate change. Why? I’m not sure, but I think it is because nerds are particularly able to read the reports with sufficient technical knowledge, combined with dispassion.

Please, a well written blog post from Vinay… Barely all I’d need to do would be to retweet it. Or if that didn’t work, go and tell the awesome community at Cleanweb UK what help was needed.

Let’s sort it out. Or if not, at least learn.