The next page I found in the notebook (after the last one) is my own view of the problem of information goods having zero marginal cost, so not functioning within capitalism. Paul Mason describes this in Postcapitalism. 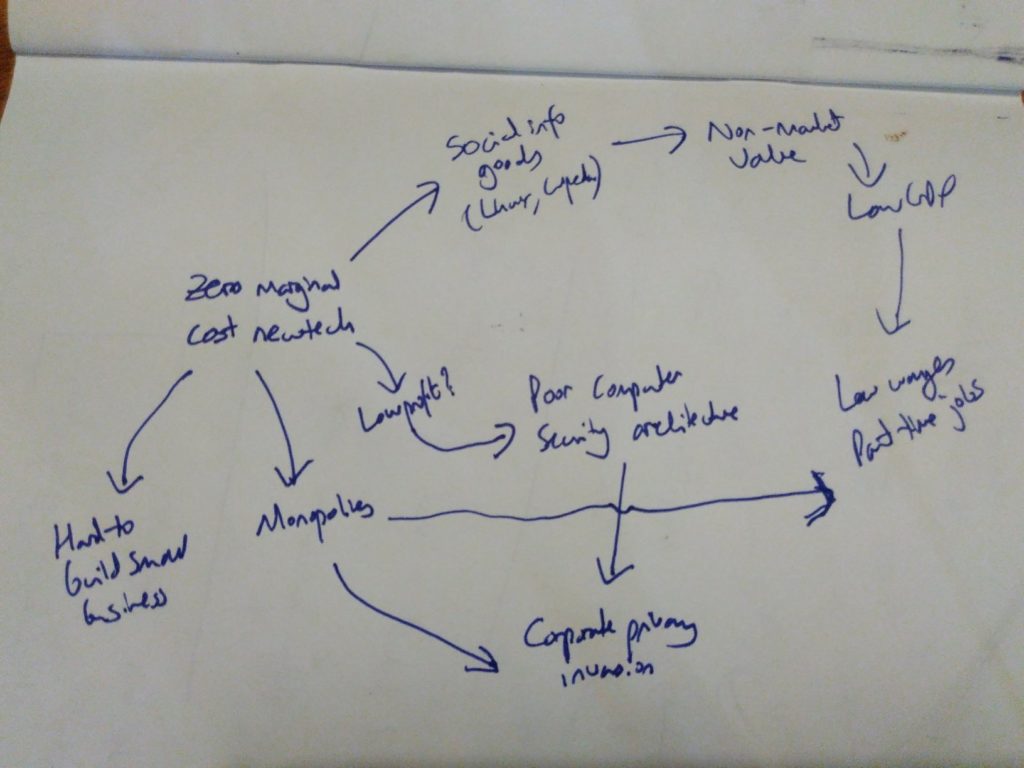 Walking through the diagram…

“Zero marginal cost newtech” is the starting point. A “marginal cost” is a business term for the extra amount it costs to make one more of something. For digital goods, such as MP3s or converted PDFs, this is essentially nothing. This leads to the possibility of cheaper and cheaper, more and more freemium business models, driving the value of the information good in and of itself to nothing. The arrows lead out to four options at this point.

1.”Hard to build small business” means you slowly and tirelessly build up a tiny, global business which eats on the scraps left, the stubborn customers, the niches. This doesn’t make much profit, and is hard work. Look at pay for email companies, as an example.

2.”Monopolies” is when you force the market to have no choice but pay you, such as Windows in the 1990s. Or perhaps where you reduce the cost to zero to gain the monopoly, and use advertising for revenue – such as Google Maps. TomTom’s old business looks weak nowadays!

3.”Low profit” means there isn’t much money in any pure software businesses there are. This leads to “Poor computer security architecture”.

“Corporate privacy invasion” is done deliberately by the zero-charging monopoly to help sell adverts, or to sell your data to insurance companies, or whatever. It is done accidentally by poorly architected security in low margin software businesses, meaning you have data breaches and loss of privacy.

4.”Social info goods (Linux, Wikipedia)” describes the plus side of the zero marginal cost. You can make public goods and distribute them to millions or billions of people cheaply and easily. This is very satisfying.

“Non-market value” explains that the value of these social information goods is not measured by flow of money. Actually, that’s true of the value of zero-charge capitalistic goods too.

“Low GDP” – so the economic productivity of your nation looks much lower than it is. It doesn’t include encylopedias any more, even though people are getting huge value from them, more than ever.

This is really a variant on the classic “robots will eat all the jobs” argument. It’s a simpler version of it, based on the robot we all have called a computer, which can infinitely replicate a digital good, tirelessly and at no (marginal) cost.

It’s worse than for physical goods, as you can’t even tax these robots to fund a basic income.