I spent the last two weekends with people from the expatriate community; first in Halong bay and then in Hanoi. Being an expat is pretty different from being a tourist. You are away for so long without the constant newness of travelling, so finding places with home comforts is more important. And western comforts are very much available in Hanoi, and in a form even in Halong.

If you work in Vietnam and are on a European wage, then locally you’re very rich. For $30 a month you can employ a full time maid to do your cleaning and washing. The office by necessity employs cars with drivers to transport staff around, but they also get to use them in the evening and at weekends. No need for taxis or to buy a car. 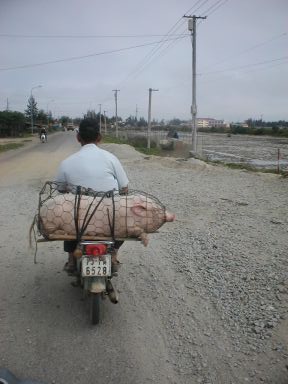 Travelling in a car in Hanoi is an eerie experience. Usually I’ve been getting round by Xe Om (literally “motorbike hug”), which is a scooter taxi that you sit on the back off. Almost all the vehicles on the streets are very low power motorbikes, buzzing about at 20mph. A Honda Dream is the dream purchase. Powered bike traffic has many advantages; it’s cheaper, many more vehicles fit on the street, it is environmentally friendly, it is point to point even going down narrow alleys. Of course it isn’t so good in the rain, or for old people, and it is dangerous. You’d be amazed by the luggage people can fit on a motorbike – I’ve seen entire chicken coops with chickens, a very large pig in a cage ready for slaughter, and Gavin even spotted someone transporting another bike on the back of a bike (OK, it was a pedal bike).

The world of the larger vehicle, bus or car, ethereally intersects that of the motorbikes. You constantly honk your horn, and the motorbikes flow round you, as if you were driving through syrup. It’s a quite different experience being ferried to an expensive restaurant, compared to moto’ing your way to a Com Pho (rice/soup) shop. The moto is much more exhilerating, the car feels calm and magical. One day there will be too many cars and the current system will become really dangerous, everything will have to slow down, and more traffic laws will need to be enforced.

To achieve home comforts, expatriates often head for restaurants serving Western food, and bars in a European style. There’s also a strong link with Vietnamese culture, as many learn the langauge, and in business have to deal with the Vietnamese. However it is fundamentally hard to really get into it. For example, women tend to be either prostitutes, or very traditional that you have to court and marry before you get to know them. It’s difficult to relate as an equal.

The lads took us to the bar at the bottom of the Fortuna Hotel in Hanoi at about 7:30pm, just for the experience. Extraordinarily, there were maybe two hundred girls there, all stunning and dressed up, being counted off by their motherly minder. It was Gavin’s birthday, so she tried to parade the girls in front of him for him to choose a favourite. Because the lights were dimmed, she had a torch to shine in their faces so we could properly size them up. It made me feel quite sick; although the girls looked bright and happy, and are no doubt relatively well paid in total, I felt more like I was being showed chattel than introduced to people. They were available either to keep you company for the evening or for more, as a service offered by this swanky four star hotel. Just as the Hong Kong businessman can pop down to the 24 hour bar for a drink after finishing business at midnight, he can also pop down for something else.

It’s important to note that this is a regional phenomena. Asian prostitute mainly caters for Asians, and exists for Asians. Many Western tourists and many expatriates love it, and that is why they come to the area. But this sort of service at a posh hotel would be a bit much for most European staying there, I think it is more expected by a visiting Chinese businessman.

Another service popular with the Chinese is gambling. There’s a brand new casino in Halong City. It only opened a few weeks ago, and I met a black African employee in another bar. It was really really great to see a black person, I realised that I’ve missed the racial diversity that I take for granted in the UK. He worked for a South African gaming company, in Vietnam for a year to train the local staff. We all went to visit the casino the next evening, and the croupiers certainly looked like they needed a bit more practice before they were ready.

The casino manager chatted to me for a while. He was most dismissive of us (the expats were gambling away “small amounts”, such as $50 all told). He said nearly all the money they will make is from Gaming Junkets. These extraordinary operations bring busloads of gamblers. An organiser takes all their money, hundreds of thousands of dollars each, and administers buying gambling chips, as well as transport and hotels. I got the impression they were also a sort of competition between the gamblers, with the organiser keeping track.

Some people have more money than you or I can imagine, the manager said to me.

One thought on “Expatriates, Prostitution and Gambling”