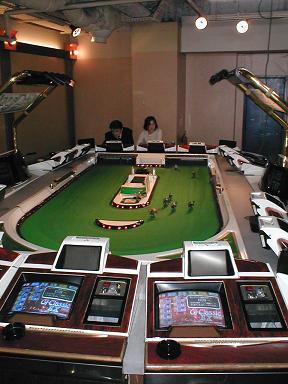 There are amazing gambling alleys near here (Minami area of Osaka) with countless ball bearings which get shovelled into machines that bounce them round and spit them out again at their own whim. In the morning there were queues outside, the addicts reading comics waiting for it to open so they can get their fix. Another place people were betting at machines in groups round a real, physical electro-magnetic horse race (see picture). Others had chosen a curious automatic roulette-like wheel, or something else a bit like a lottery machine.

I spotted an interesting hybrid of a collectable card game and a football video game. The machine had a flat table where you place the cards for your team members, putting them in defence, midfield and so on. Some electriconic wizardry then detected who each card was, and the player appeared in the computer game. The marketing genius of this is breathtaking.

As I wondered round these gaming alleys, to my surprise I found something that I had to have a go on. There were two typing arcade machines, one of which was Typing of the Dead which I’d played at work a few times. Basically there’s a keyboard, and monsters appear on the screen with words next to them. You type the word in as quick as you can and the monster gets shot with each key stroke and dies. I had a go on the second of the machines, which often featured moving vehicles that you were on the back of so the words would shake about and go in and out of view. I can type very fast, and was disappointed that no audience gathered round me like they would at Creature Labs. All the words are in Japanese, but luckily they print them in roman alphabet letters as well as hiragana. That is until stage eight, which rather unfairly involved a strange scene with cryptic go-go dancers. The words would appear asterisked out, with characters appearing at random so you had to guess what it was before it was completely formed. The unfairness? No romanji. I sat there aghast, shouted out loud “that’s unfair!”, peering at the unfathomable hiragana, pounding the keyboard at random as the ballerinas pirouhetted round and obliterated me with their curious gunfire.

The young professionals staying in the capsule hotel have other sorts of entertainment in the area. At first I was quite excited by the signs for the 24 hour DVD viewing place, with individual private rooms. Cool, I can catch up on exactly the movies I want to see that I’ve missed. Upon closer inspection though they turned out to be not serving that kind of film…