Wow! I’m in a slightly different sort of internet cafe, and not just because it is ten times more expensive than in China. It’s called Kinko’s and is more of a 24 hour business services centre, with photocopiers, binders and large volume printers. The computer I’m on is a Mac, which makes a nice change even though I don’t know the keyboard shortcuts. No new fangled OS X stuff alas, just OS 9. There’s a scanner and about four different sorts of zip/superdrives plugged into it, plus a choice of printers colour or black and white. Your’re even provided with a Merriam Webster thesaurus and a dictionary; yes, physical ones made out of paper. There’s nobody else here using the computers – obviously no Japanese person would be seen dead in such a place. Why bother, when you have a DoCoMo mobile phone with all its services? Give it a few years and there’ll be no public internet access at all and you’ll have to add buying a laptop to the considerable expense of Japanese travel. 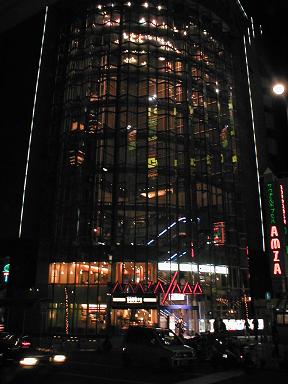 Last night I stayed in a capsule hotel (picture shows the block with the glass elevators on whose seventh floor it was housed). A much pleasanter (wow, it’s much pleasanter checking the spelling of pleasanter with a real dictionary, rather than opening up another Window and withstanding the hideous adverts of dictionary.com) experience than I could have imagined. You get a cuboid space which was exactly as long as me, high enough to sit up in and wider than a single bed. It is sealed at one end with a bamboo blind – you can’t lock up your cubical, it is really just a fully enclosed dormitory bed. There’s a TV where I watched the pictures of Saddam’s statue being torn down in Baghdad and tried to understand the full geopolitical implications from snatches of English.

The best bit is that you’re not trapped in your cubical, there are communcal spaces with vending machines (as well as food and drink, everything from t-shirts to an auto-electric massage chair) and arcade games, as well as washing facilities and lockers. Japanese hotels courteously provide you with a night-gown to wear, and all through the night young businessmen were wondering in and out, smoking and watching martial arts movies on the communal TV. It’s a male only place, which makes sense given its intimacy.

Suits are all the rage here, there are numerous magazines entierly dedicated to them. I feel distinctly unstylish, with even people in rougher casual clothes wearing a suit jacket as part of their carefully selected apparel, so they look ruffled and feisty. For once I am completely hidden, camouflaged. Nobody notices me. It’s not exciting to see a white peson, especially when you’re richer than him anyway. It makes me realise how much rough travelling in poor countries is a colonial experience. It’s partly fun because you are the exotic, it makes you feel important for everyone to be surprised and pleased to see you. You tell yourself that you like it because people are friendlier, they have more of a sense of community. But really you like it because you’re rich, you can buy whatever you like or stay as long as you like without having to worry about it.

This is just a more clearer aspect of what is going on anyway, even when you’re not travelling. When you actually go to a developing country and buy things then it is quite clear that they are cheap. However, in the West you are all the time buying and importing things from less wealthy places. And those things are just as cheap. And I constantly ask myself, why are they? What sort of inefficient market it is where the same work is worth more or less based on the geographical location of where it is done?