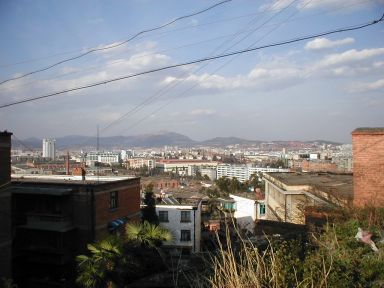 On the first Friday afternoon I was in Kunming, I finished my last class and looked out the window at the alluring mountains on the edge of town. So I hopped on an appropriate looking bus, and went to the end of the line to see what was there.

As you get further out of town, things become that much rougher and less developed. Distinctive kerbed pavements vanish away, replaced by rougher road edges. I got off the bus as near as I could get to the mountain, and explored the local area to see if I could get up for a view. People’s expressions were much bleaker. In town you’re largely ignored; here you are ignored but it is clear and unsurprising that people are a bit suspicious of you.

The landscape was very dramatic, as it include all types. There were agricultural fields and mountains, but also blocks of flats, one or two grand office buildings, and nearby industrial sites. The growing crops were particularly striking in contrast to the otherwise very urban landscape. The local area had different sort of shops than in town. It was back to the rough street markets that you find in SE Asia, and small shops opening onto the road with very limited supplies. But people looked less content, less receptive, there was more tension in the air. Some dogs barked to guard their land.

I walked up a hill, and people were helpful, showing me where there was a toilet outside a local community centre, and selling me an ice cream. I wondered up into a compound around several blocks of flats, and could imagine knowing someone who lived there. It looked a pretty reasonable place to be. I got stuck, and had to backtrack back to the main road and go up a different hill where there were fantastic views over the city (see photo). A couple of children outside a house watched me as I went past, “younger brother, there’s a strange man!” one of them said in Chinese, cheerfully.