While I’ve been in Kunming, I’ve been doing a bit of touristing at the weekends. The great thing is that most of the other people visiting attractions are Chinese. Unlike in SE Asia, the Chinese are both wealthy enough and keen enough to be domestic tourists. And, well, they don’t quite do it the same way as Europeans.

The first weekend I went to 大观 park (Daguan, Great View) which is on the edge of a lake just outside town. Local people rave about it. It was a decidedly clinical place, very formal and unnatural. Square is the best description. Nothing was left even slightly untamed to nature, with lots of walkways across parts of the lake, carefully controlled and cropped trees and grass. There was no flow in the outline of anything, except the old pagodas – all the new buildings selling snacks or providing toilets had sharp corners and flat roofs. Nevertheless it was pleasantly charming walking round it, with lots of happy Chinese folk mainly flying kites in the large but carefully demarked kite flying area.

I quickly took the boat along the lake to where you can catch a cable car up into the 西山 (Xi Shan, West Mountains). Outside the cable car station there was one restaurant which charged me an exhorbitant amount for some not very good fried rice. I’m told that Chinese tourists like to spend a lot on their dinner, I can only guess because doing so makes them feel they must have had a better time. The view from the cable car, and from the top of the mountains was spectactular, down across the lake and the city. You could see all the skyscrapers and maybe just believe that 4 million people live here.

There are are some Taoist shrines called 龙门 (Longmen, Dragon’s Gate) in the mountains, carved out of the very rock face itself. A devoted monk started work at the end of the 18th century chipping away with a hammer and chisel. Most amazingly, inside the shrines there are sculptures of deities also chipped out of the same rock in one seamless piece. An old man was collecting used plastic water bottles and persisted in talking to me despite our lack of a common language. He pointed a long way off into the distance, and as far as I could tell he was trying to say that he sold them for recycling in Vietnam.

The weekend after I went to 石林 (Shilin, Stone Forest) on a small bus with a Chinese tour party. It’s quite a long journey, and on the way there we stopped off at a Place That Sold Jade. I’d got slightly used to these pointless extra visits in Vietnam; they reduce the price of the tour, but are ultimately annoying. This one was as big as a medium sized supermarket, with a dense scattering of people all Chinese. It was also most tacky, the jade objects presented in cheaply made glass cabinets, their lids not fitting and their metal frames dented. These cabinets rested on tacky plinths with pink edging and faux-cork paint. Although the ceilings were high, the lighting was from garish energy efficient bulbs and a chandalier from a low-class casino, so it was still a bit claustrophobic. People seemed content. The jade bracelets, rings, pendants and teapots must have been quite cheap. 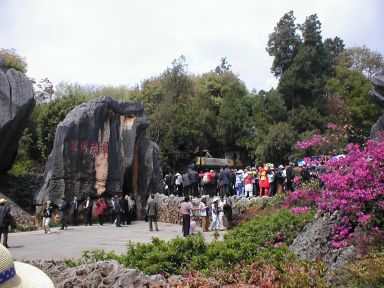 We arrived at Shilin which is literally a forest of rocky protrusions as high as blocks of flats. Somehow despite its natural beauty the landscaping made it like a theme park, and if you’d told me the rocks had been put here by the tourism department I would have believed you. The Chinese tourists were hilarious. They would cluster in groups spending hours taking photographs of each other with the stone monoliths as a background. So being a good self-refrential European, I took photos of them taking photos. In the picture on the left you can see them all on top of a two metre high wall. They loved this and would stand on the edge having their snaps taken. Because of the sudden drop there would be no other tourists in the viewfinder, just the stone forest behind.

It was very atmospheric exploring the forest. The path was truly three dimensional, twisting and turning, climbing up high to a limestone peak, and tunneling down under itself into the dungeon-like depths. The Chinese tourists were always in large groups, never alone or in pairs. This meant that at one moment you would be all alone, imagining yourself a primal caveman awed by nature. Then suddenly, turn a corner, and there’d be twenty tourists all laughing at a small gap in the rock which (most of them) could just squeeze their neck through; their head and body going through larger gaps just above and below.

There was even a man texting in Chinese. I daren’t think how this works. The obvious way would be to key in 拼音 (Pinyin, literally “Spell Sound”, the phonetic Chinese using the Latin alphabet), which first of all would involve typing the words in the tedious text way that we all have to, then choosing from a menu of which character you want for that sound (there are many characters with the same sound). Alternatively, perhaps they choose from 3,000 common characters by pressing one of the numbers repeatedly up to three hundred times.

I’m only just getting used to how people universally have decent clothes, compared to Vietnam where I came from last. They are well repaired, clean, and essentially western in style. The women even all wear trousers, and I wonder if they always did, or if fashion travels eastwards too. Everyone is washed and well kept, no roughness here. All the degraded stuff is on the outskirts of Kunming, where faces are grim, and you’re not meant to go…

The bus back dropped us off in a remote part of suburban Kunming inside the grounds of a hospital, at a health-care and massage place no doubt also financially affiliated to the tour. I left, and tried to ask a shopkeeper 我在哪里 (wo zai nali, “where am I?!”) in broken Chinese, showing him my map. It made no sense at all to him, because instead of 在 I used the wrong verb 是 (shi, which also means “to be”, but as an exact identity rather than being at a location). I ended up gesticulating frustratedly, until eventually he guessed what I wanted and told me which bus to take home.

One thought on “Kunming Local Tourists”