I love Chinese characters. They’re great fun, so much more interesting than rather dull alphabets. I know at first they seem like a really stupid idea – surely it is better to have a phonetic representation in writing, rather than arbitary and innumerable pictures? One way to look at it is that they are at a granularity inbetween the letter and the word. By this I mean that one character has slightly more meaning than one letter of the alphabet, but slightly less meaning than an English word. Similarly, there are very few letters (only 26), slightly more characters (about 3000 are needed to read a newspaper), and many more words. So you spend the effort to learn characters in the first place, but that makes learning words easier than in an alphabetic language. 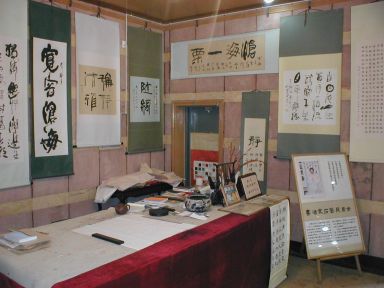 What’s a “word” in Chinese? They are composed usually of two or more characters. For example, 汉字 (Hanzi) is a word composed of two characters which means “Chinese character”. Another good example is 中国 (Zhongguo, Centre Country or Middle Kingdom) which means “China”. I’m typing this blog and you’re reading it on a 电脑 (Diannao, Electric Brain), which is ever so slightly creepy. But that first character, it really looks like electricity, doesn’t it? In English we have words made up of smaller words in a similar way – just look at “telephone”, “television”, and so on. It is much rarer that long words make sense like this in English than in Chinese.

I’ve probably learnt about 100 Chinese characters, but that’s enough that I recognise the major elements in nearly all of them. Walking down the street I don’t have any more understanding of what the signs mean, but now they all look like good friends. There are parts of the characters that indicate they have a certain meaning, for example to do with water, people, language or food. There are also phonetic parts, which show another character that that one sounds roughly like. Most importantly, you soon get familiar with the basic sets of two or three strokes, so every character looks like it is made up of parts from other characters that you already know.

The disadvantage of all this for a language student is that it is much harder to learn. For every word you have to learn three bits of information – the meaning, the pronunciation and the characters. This is partly why Chinese has a reputation for being difficult. One of the first things the new Communist government did in the 1950s is introduce simplified versions of many of the characters, so the rural poor could more easily learn to read and write. Japan, Taiwan, and Hong Kong still use the old, complicated, traditional characters.

The picture is of some Chinese calligraphy in a gallery at a temple outside of Kunming. There’s a whole art form of painting characters with a brush. An eerily primitive beauty, reminding you of the underlying concepts which our words represent, much nearer to the language that we’re all really made of. I wonder, do Chinese people think in characters, instead of pronunciation?