Sarajevo (first photo) was absolutely astonishing. I arrived unknowningly some way out of town at an eastern bus station, and was amazed by the taxi ride through what seemed like a teaming metropolis. I’d expected it to be rundown and wartorn, but by night it was a thriving European capital. After leaving my luggage at the private room I was staying in, I walked round the town to find somewhere to have dinner. I stumbled upon the most beautiful mosque (Gazi Husref-Bey). The courtyard was tranquil, with a few people sitting about in quiet contemplation.

The next day I went on a tour out to the famous tunnel. During the siege of the city in the early 1990s this was the only route in and out, for supplies or people. Before the attack by the federal Yugoslav government the citizens didn’t even have an army, but they managed to hold out their defences for years. It’s truly astonishing, and more so that the city has rebuilt so quickly. There are a few buildings left scarred with mortar fire, but most have been repaired or reconstructed. 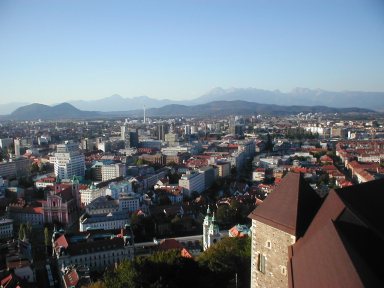 I was most surprised that Bosnia felt in such better condition than Albania. Albania did have a small civil war in 1997, but nobody was killed. Bosnia suffered years of war and genocide. Somehow the international community is paying attention to Bosnia, with EU grants for reconstruction, a large UN presence, and busy aid agencies. Albania didn’t have a noticeable foreign presence, despite its recent relation to the Kosovo war. I speculated that Sarajevo would be such a pleasure to live in, a real ancient European city, whereas Albania was more like a run down desert. Perhaps this influences which country creates the largest sentiment in donating western Europeans, and which country diplomats and aid workers prefer to have to go to.

Next I went to Ljubljana for just an evening, to visit the castle. I really enjoyed Veronika Decides to Die by Paulo Coelho whose opening scene is signficantly set there. Ljubljana is a gorgeous city, nestled in trees, small and approachable in size for a capital. The view from the castle (second photo) was gorgeous.

Then I wound my way back by train to London, stopping to visit my brother in Switzerland for the weekend on the way. Amusingly the only transport in my whole journey that was significantly delayed were trains in Switzerland and Paris. So much for their reputations for ever-punctuality.

The highlight of the trip was definitely Gjirokastra in Albania. It really was worth travelling overland, to see a few places near borders that you would never otherwise visit, and to visit interesting countries you wouldn’t otherwise get round to. My mind has a better sense that the world is continual. That you could walk out my house down the road, cross the sea, keep going. Not so far away, you can end up in war-damaged and poverty-stricken places.