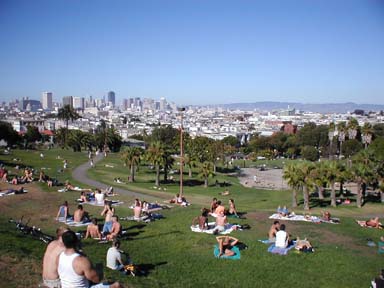 I’m back in San Francisco after a road trip all the way down to San Diego. I’m flying back to Europe later today, so it’s time to post some impressions of America.

California is itself quite diverse, and no doubt the rest of the US is even more so. When I arrived here, I was surprised how roughly cut it felt. San Francisco feels most like a Latin American country, curiously the most similar feeling place I’ve been to before is Cuba. Of course, San Francisco is much richer, but it lacks glitz. The road surfaces are imperfectly maintained. There don’t seem to be any shops because their hoardings are so modest. No glaring neon adverts, or bright bold colours advertising their windows.

After going to Burning Man, San Francisco felt much more familiar and homely. It’s a fab city, with endless surprising views down the long crazy roads which shoot over hills. The photo above is of the corner of Mission Dolores park on a Saturday, when many tanned and body-built gays pose in the sun admiring the view. 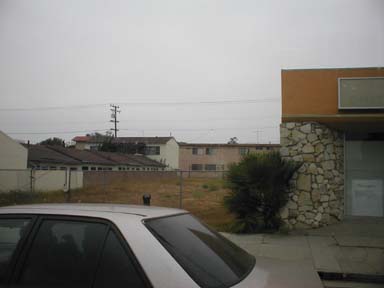 Los Angeles. Hell on earth. The movie industry is incredibly good at PR, at disguise. They manage to make the city look good! But really it is endless eternal, indistinguishable bleak city blocks. No people walking round, except clumps of latinos lurking (probably waiting for work buses to take them picking in agricultural fields out of town). Empty lots in areas which should be valuable (photo left). Repeated burger chains and cheap superstores. Only the rarest gems of quality, each 20 minutes drive from the last. Even the famous part of Hollywood, with stars on the walkways and the Oscars’ theatre, is a grotty boulevard, beaten by far by the theatre district of every other city that has one. 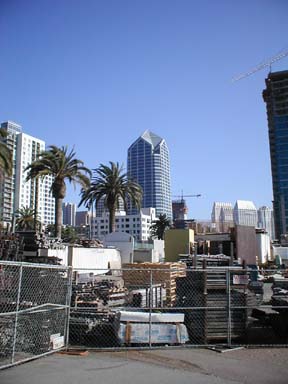 It’s like a normal city which has been insanely squashed and spread out. There are many parking lots because you have to drive everywhere. You have to drive everywhere because there are so many parking lots to drive past to get to your destination. Next time I find anyone promoting out of town superstores in the UK at the expense of, say, building new town centres, I’m going to kidnap them. Fly them to LA, pick a random street intersection and drop them there with a compass and no money. Make them walk to civilisation, so they can properly see the awful consequences of not planning a town with a civic centre, with structure, with design and art.

Somebody has been planning San Diego (the photo to the right is of downtown skyscrapers taken from across a building lot). Yes, gorgeous Balboa park was made by horticulturist Kate Session in the 1890s. Yes, the happening gaslamp quarter was deliberately redeveloped in the 1980s. They’re both lovely, they feel like places. Even our generic Super 8 motel had spectacular views in San Diego.

OK, maybe I was just happy because we found the Karl Strauss brewery at 10pm on a Saturday. Amazingly, then is happy hour at just $2 for a pint of microbrewed ale. No, it’s not just that. San Diego really is that dreamy Californian paradise on earth. And so much more tasteful than I thought.