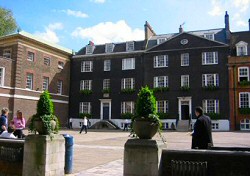 Imagine a school with a set of complicated rules. It’s an old school, very old. About 1000 years. Numerous head teachers have modified the rules over time – banning running in corridors, or creating tort for pencil poking. Occasionally the deputy head of timetabling thinks they are getting a bit complicated, and simplifies them a little. But this doesn’t keep up at all with advances in technology – new rules about smart whiteboards, PFI and computer hacking. So it gets harder and harder to understand all the rules as time goes on.

Even though the rules are quite complicated, they’re by and large pretty good, and the kids agree with them. However, sometimes, accidentally or deliberately they break one, and end up in detention. The kids try as hard as they can to obey the rules, but they still get it wrong. Why? Because the staff won’t let them see the rules.

There’s a copy of the rules in the staffroom, but the kids aren’t allowed in there. They put up parts of recent rules on the school website, but these are meaningless without the older rules that they modify. There are several private publishing companies which sell the rules. The publishing companies are so old they have their own copies of the rules, and they have lots of staff to maintain them. But not all the kids have rich enough parents to afford to buy those rules.

Sounds crazy? It’s worse than that. The school’s a country, and it’s called the United Kingdom. And the rules are “statute law”; that is the law “as amended” by acts. i.e. The law in force today that we have to obey.

Just recently, I’ve tried requesting the database of statute law under the new Freedom of Information act. Unfortunately, the request has been denied on grounds of cost. The Department of Constitutional Affairs claim that making an SQL Server database dump takes more than three and a half days.

11 thoughts on “School without rules”