On Christmas day I broke my collarbone (clavicule). Inattention on some ice in the street in Switzerland, and I fell before realising I was falling. I don’t know how I landed, as my body instinctively leapt up and sat against a shop window away from the street for safety. Clever thing, the human body. 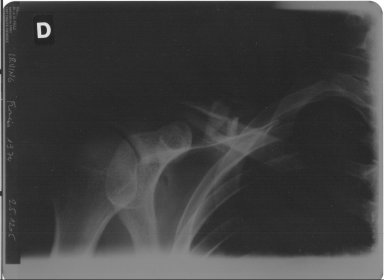 A Frenchman came and asked me if I wanted a doctor (luckily basic French doesn’t disappear with injury). I thought I was just winded, but then realised I couldn’t lift up my arm. He kindly gave me a lift to the surgery and an efficient medical system filled me with morphine and gave me a sling. (Paid for later via the European Health Insurance Card which luckily Rosemary had told me to get earlier in the year. Apply for yours online).

After about six weeks, with no substantive further treatment, I had full movement of my arm back. I’ve got a pointy spike sticking out of the top of the shoulder, which I still feel every day because it is so weird (see photo right, which is a scan of the X-ray of my shoulder taken in Switzerland). There’s a lump of new growth bone just below it. That lump binds it to the other half of the collar bone, on into my shoulder blade. There are two amazing things about this.

Firstly, bone just heals like skin, binding itself together. It’s a living, breathing thing, not just a structure that can last buried in the earth for thousands, millions of years. Secondly, that the shoulder still works in full, despite now containing a bone of much distorted shape from the original. Imagine taking a complex machine made by man, such as a car, and randomly sawing one of the metal rods in half, then welding it back together haphazardly, and the machine still functioning.

I’m reminded of this because an old friend just rang up with bad news. His father has died of cancer of the pancreas. Not young, but not as old as we are lucky enough to expect to live in Britain these days. We both cried on the phone, and because we used to do an A-level in it together, talked about biology.

Cancers are in some ways very natural. It’s not an external evil, like BSE prions or HIV virus, but our own systems that fail. Cells naturally grow and reproduce, and cancers are mutant ones that fail to do that in a controlled manner. The body has several layers of protection which detect most cancers – my friend said particularly good at doing so in growing small children – and stops them before we even notice. But sometimes this fails, and the cell sucks materials from the rest of the body, and divides uncontrollably.

This year I feel like a miracle has returned me full use of my arm. However much we understand the process, it is simply incredible that the body can heal itself so well. I fell like a regenerating troll from Dungeons & Dragons. And yet also the same force for good can turn to destruction. And one day I too will die, this healing power not enough. A cancer out of control, a bus I didn’t notice, a heart stopping, taking our last unbelievable breath in this beautiful world.