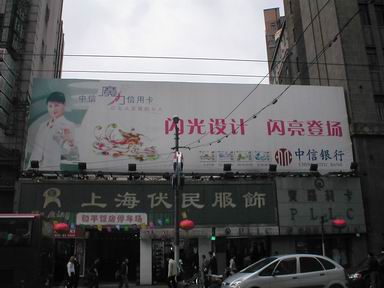 It’s always a bad idea to have expectations. There’s been lots of hype about how fast Shanghai is developing – accelerating out of poverty, and into a world class city. And it’s true – Rosemary was here 20 years ago, and is amazed that you now can’t cross the road without being killed, that everyone is fashionably dressed, rather than in Mao costumes. However, I had higher expectations. This is because I’d been to Kunming, far away provincial capital of Yunnan, and was surprised how developed it was. So I thought Shanghai would be more like Tokyo than Bangkok.

Actually, it is quite dirty. There isn’t the century-long burnt in elegance of a European capital, the clean efficiency of a Japanese megalopolis, or much culture backing the poverty, as in Bangkok. Shanghai has old-style department stores with goods and prices that people don’t want. It has no large open spaces. There are lots of new buildings, but they don’t look like they’ve been built terribly well. The forest of new skyscrapers are (to me – Rosemary liked them) tacky, and the main city is badly laid out.

We went to the Shanghai Urban Planning Exhibition Hall (it’s in the wing roofed building, SE of Renmin square) where the government tried to impress with descriptions of the greening of Shanghai, and new housing areas being built in the mud flats to the East across the river (Pudong). There are new trees and bushes planted everywhere, on the side of every road and in every corner. Which is great, but they are regimented, like they have been placed by an engineer – if plastic cleaned the air, they’d have used that instead. 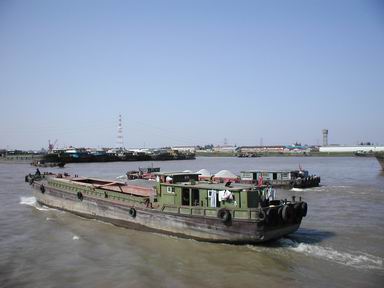 I am impressed by the graphical style, for example in adverts. Perhaps partly because I don’t understand them! The picture above is of a typical example. Chinese writing has some beautiful fonts, and they have lots of stark white backgrounds, with colourful, uplifting images.

We went on a cruise along the Huang Pu river, up to where it meets the larger Yangtze. This was a great opportunity to see Shanghai’s real function, as a sea port. Hundreds of derricks lined the coast, and the river was full of boat traffic. Typical, and most curious, were the boats people lived on (picture right). They had their washing hung out to dry at the back, and zipped up and down on cargo errands.

We left Shanghai the day before yesterday, on a soft sleeper train to Kaifeng.