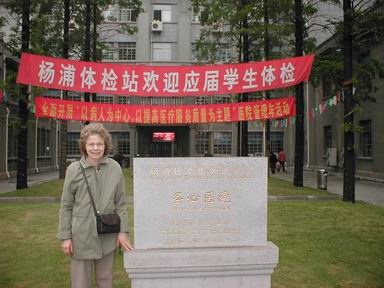 Imagine it’s May 1945, the war in Europe has ended, and the Americans have captured (parts of?) Okinawa, the tropical island in the very south of Japan. Allied air raids are starting over Shanghai.

Your husband has been sent by truck with your belongings, and you are with your two daughters, aged 3 and 6. You’re being marched by Japanese soldiers part of the way from one internment camp to another. You haven’t been out into the streets for over 2 years. You’re probably suspicious, afraid. Where are you really going? Will you continue to be treated tolerably, as you have been the rest of the war? Will you and your family survive?

On Saturday morning, we went to visit the site of an internment camp where my mum, her sister and their parents had been held hostage by the Japanese at the very end of the war. This was Yangtzepoo camp (on modern Yangshupu Lu), the second camp they had been in after Yu Yuen Road camp. Judging from the meter on our taxi, the march from the Bund to the new camp was 6km.

To our amazement, we found the camp not only intact, but thriving. It’s near the river, the Yangpu Bridge flyover arching past along Ningguo Road. The photo above is of Rosemary in front of its heritage architecture plaque. It’s called the Sacred Heart hospital, as it was before the war. The guard was very friendly, and let us wonder all round – it seemed a modern, clean, hospital. Well sign-posted in Chinese and English. The photo below is a detail from the ceiling in the main building. I took lots more photographs which we’ll put up somewhere when we get back. 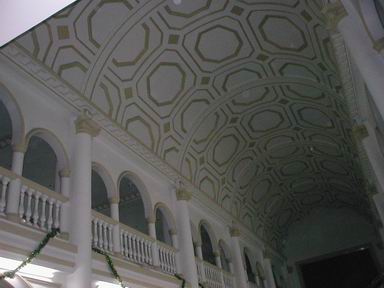 We walked back, following the route of the family’s forced march 61 years before. It’s now a run down corner of Shanghai with tiny cramped shop/house hybrids and street food. We walked past the waterworks, which is a fantastic set of old crenelated buildings, well maintained, re-pointed and landscaped with flowers. You can’t get in, it is very much still in active use.

So, what was the new camp like? It was worse than the old one. Cramped, and left in a terrible state by the Japanese soldiers who had been using it as a barracks. The soldiers had moved into the old camps the internees had just left. They were afraid that the Americans were about to bomb them. Fortunately, the war ended and the internees were released before any bombing.

My grandfather always said that the atom bomb had saved the family’s lives. If the war had dragged on for even a short while longer, the Americans would have almost certainly bombed the camp, as they thought it was still a Japanese barracks.

So, this leaves me in the unenviable position that if it weren’t for the nuclear bombs, which killed over a hundred thousand people and introduced the world to its most devastating weapon, then I wouldn’t exist.

5 thoughts on “Child of the atom bomb”