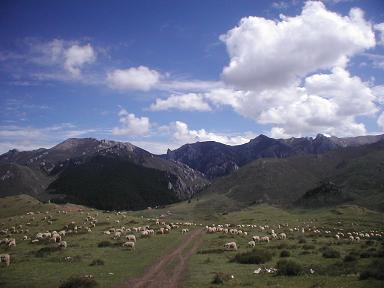 Tibetan sky burials sound very odd, exotic, macabre. After being shown a sky burial ground by a native who takes part in them, my mind began to twist round and see them as normal. Just as many Tibetans do – I don’t know figures, but it is widespread. A sky burial goes like this.

The funeral party meets at the house of the deceased and his or her family. They have some sort of a gathering (I’m imagining, similar to an Irish wake). Then the friends and other villagers take the body of the deceased to the sky burial ground. This is a gentle grassy place, a little way up on the edge of a hill just outside the town or village. Close relatives of the dead person stay at home.

Vultures approach from rocks across the valley. See photo – for obvious reasons I couldn’t photograph the burial ground itself, but those are the rocks where the vultures live in Langmusi. The burial ground is behind the camera.

The body is lain down, the head placed on a special stone. Monks from the nearby monastry look on from further up the hill. The body is chopped up by the friends, using knives and similar. Bones are smashed up. The flesh gouged out of the face. Hundreds of vultures flock round, getting in the way and pecking at those who are cutting up the corpse. Other villagers watch from nearby.

The vultures eat all the flesh. Burying it in the sky. Afterwards, the funeral party returns to the relatives in the house, for a further gathering – again, I’m assuming much like after a cremation in Britain.

You’re taught to do this when young, 10 or 12 years old. Older men give you a severed arm to chop up. It’s hard at first, but a few years later you do it easily, and do a clean job. Later again, you teach the young how to do it.

It was a very messy place. Fragments of bones. Clothes – everything of the deceased is left there. Burning these things isn’t allowed, as the smoke could go anywhere and is thought to spread bad luck. A sock. A knife. One blackened, part torso, picked clean. Left by a funeral party who did a particularly lazy job. Prayer flags nearby, tied up haphazardly in large numbers. But also a calm place, green, airy, sheep nearby, nature.

The vulture is perceived differently to how our folklore sees them. They’re perceived as both a good and an evil creature. Evil, as they are sometimes horrific – taking live babies from nomads in the grasslands. Good, as a creature of cleanliness, purity, renewing the physical body into nature.

I’d read about sky burials before, although probably just in a sidebox in Lonely Planet a few years ago. Environmentally friendly, yes, but I have concerns about disease. My guide pointed out a dead vulture on the ground, he said made ill by its food.

Actually seeing the grounds, and talking to someone about it, made me realise how normal it is to Tibetans. It’s an everyday thing (well, once a week in Langmusi, population 3000), ancient and ordinary. It’s only macabre if you have an excessive attachment to the human body after death. And for a Buddhist, or an Atheist, that makes no sense.