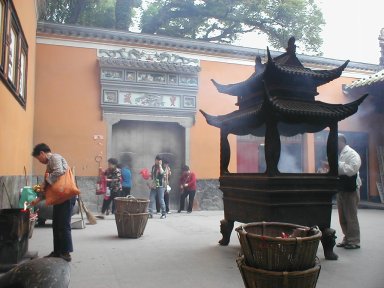 Even though I’m an atheist, it’s fun and moving to seek out pious people and watching them going about their business. A few years ago I used to do this in the UK via Cambridge Interfaith, who organised such things as a visit to the synagogue on a Friday evening, and a day trip to the Hari Krishna temple George Harrison paid for in Hertfordshire. And I saw lots of religious places with Phil in Burma (see parts of this post and all of this one).

China’s religions are in resurgence, as things continue to loosen up following the Cultural Revolution. Numerous temples have been rebuilt recently. Just before leaving Shanghai, Rosemary and I went on a two day trip to Putuoshan. It’s a Buddhist holy island, a few hours journey by bus and boat south east. We spent the first afternoon going up to the top of the mountain and exploring temples. There were pious people there, lighting incense (photo left), and praying to Guanyin, goddess of mercy. Some pilgrims were even climbing the 1200m path of steps up the hill by prostating themselves forwards on the ground. They would stand up, step forward to where their head had been, and bow forwards flat, again and again.

The photo on the right is of a food area in one of the temples. You could pay a few yuan to a monk at a counter on one side of the temple, and get led off down side passages to the food area and dining room at the other side. There a lay assistant would fill a bowl with excellent vegetarian food, tasty aubergines and mushrooms and more strange Chinese vegetables. You help yourself to rice from a big vat of it, eat as much as you need. I think this is the same food the monks and their assistants ate, made available for anyone. 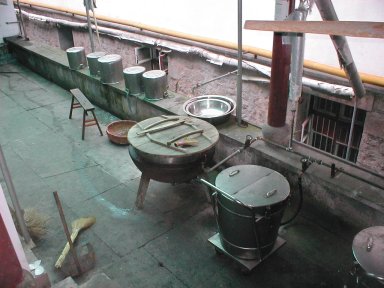 As well as Chinese pilgrims, there were also lots of Chinese tourists, most of whom we found in the morning down by the coast, coming to look at the brand new (well, 1998) shiny statue of Guanyin. She is golden, holding a small ships wheel in one hand to bring luck to fisherman. She towers what must be 30m above you, you climb up steps to her, flanked by guardians. She rests on a tower of two halls, on a promontry with almost 360 degree views of the sea. One hall contains amazing detailed wood carvings, and another 400 statues of her past lives. A stone carving frieze encircles the halls, skillfully carved with scenes of Guanyin helping locals. I’ve seen quite a few spectacular Buddhist statues, and this one was pretty good. Not to be diminished because she was new, she was awesome.

What I really want to know is how she was funded. The Chinese government have, I remember being told a few years ago, paid for lots of temples to be rebuilt, if only to attract tourists. But are there also rich Buddhist benefactors, paying millions for new statues? I haven’t found the answer, but here is a description of the Guanyin statue and some photos of her.