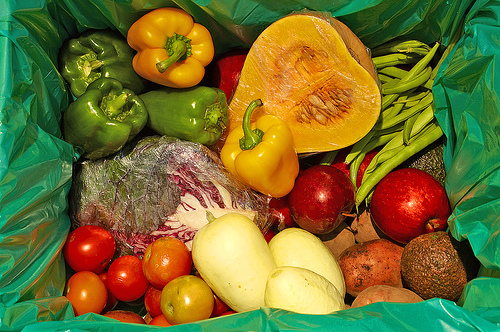 For three years now I’ve subscribed irregularly to a box of fruit and vegetables from Cambridge Organic Food Co. On Sunday or Monday, If I’m going to be at home enough later in the week, I leave them an answer phone message. Then on Wednesday afternoon there’s a knock on the door, and a friendly man gives me a crate of freshly selected seasonal goodness. (Photo right is illustrative and actually in New Zealand, it is licensed for free reuse by darren131)

A few weeks ago, on a Saturday, Mark and I went on their organic farm tour. We had Duncan from COFCO as our guide, and there were two stops. I didn’t take notes, so any truth below is damaged by the forgetfulness of the mind, or the dangers of fact checking with Google.

Russell Smith Farms is 2000 acres nestled around the Imperial War Museum at Duxford. His posh country clothes, accent and manner, along with the fighter jets passing overhead, led me to stereotype Robert Smith as a Tory farmer gentleman, in the nicest possible way.

Until the late 90s they were a conventional, that is to say industrial, farm. Amazingly, it is Waitrose who persuaded them to start converting to organic. There was me thinking they were a posh, expensive supermarket, when actually they’re leading a national food revolution. OK, same thing. Waitrose also promote the, new to me, LEAF marque, which indicates that a farm is nice to skylarks, and counts how much pesticide it uses. This is quite separate from being organic, and something to watch for.

When the current set of field conversions are finished two fifths of Russell Smith Farms will be organic. I think Robert said it takes 5 years to convert a field, during 2 of which it produces no produce at all. Instead you grow grass and clover, and plough them back into the soil. To my surprise clover is nitrogen fixing, a legume. That is, bacteria in its roots magically turn the most common gas in the air into what an industrial farmer would get from fertilizer.

Robert Smith was fascinatingly excited about his farm. He talked about modern hoeing machines used to clear weeds from between rows of organic crops. He constantly gave costs in thousands of pounds per acre, of how much was lost one year when a crop was blighted, or how much is spent on Polish labourers. He talked about bore holes and building reservoirs. Of badger banks and field margins. He was glad they had converted parts of their farm to organic as it made his job much more interesting, dealing with living breathing, rather than sterile fields. 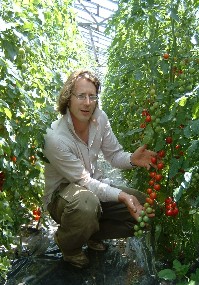 Most of us think of organic farming in the negative, by what it doesn’t do compared to the industrial farming that we’re used to. So, organic farms use no pesticide or fertilizer. Put like that it can sound foolish, mad, inefficient. Actually, organic farmers think of it in the positive, as a totally different way of farming. Organic farming is about soil, growing crops in sustainably maintained, high quality soil. It’s not about exact control of nature, but about manipulating nature to our advantage, while working with the grain of her needs.

Our next stop was at Adrian Izzard (who we didn’t meet, but photo of him right, taken from COFCO’s website), a small organic farm in an area where every house has a huge plot of land. Most of them now are used as paddocks for horses, but Adrian’s is a thriving business. Greenhouses full of the most delicious cherry tomatoes, forests of cucumbers surrounding us. We walked through them snacking, and looking at the curious insect pods. You can buy, in packets in the post, little pods of insect eggs. These hatch, and eat the pests which you would otherwise have used pesticides on. There were also tiny hives of bumblebees, it was most curious.

One last thing that Duncan showed us at Adrian Izzard’s farm. Soil, put simply, is a balance between sand and clay. A quick way to test quality of soil is to grab a lump of it and then pretend you are a small child. Roll it into a sausage-shaped lozenge, and then try and bend it. If you can’t even roll it in your hands, then it is too sandy. If when you bend it, it breaks up, then it is just the right mix, known as loam. If you can bend it round, and mould it into whatever shape you like, then there is too much clay.

The nicest thing about getting an organic box delivery? I can’t remember exactly why I originally started ordering one a few years ago. Perhaps it was for ethical reasons – to treat the countryside better, to reduce food miles and hence carbon emissions by buying local food. But actually, the best thing is this. It is good being given seasonal fruit and vegetables, without having to select them yourself. An antidote to option paralysis. It is good being forced to work out how to cook things whose name you don’t even know. Tasty, fresh and fun.

One thought on “Sand and clay”