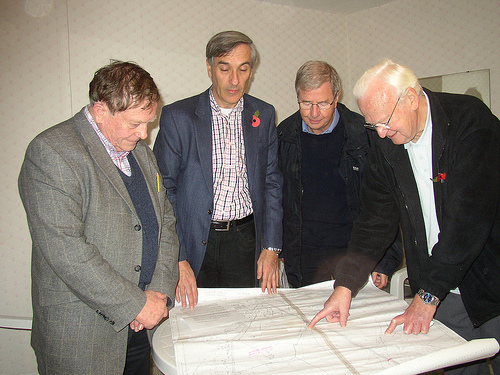 I like John Redwood. I started reading his blog in 2006 while I was involved in the Save Parliament campaign, trying to stop the Government pass a Bill whose craziness you’ll have to read about by following the link. John spoke prominently on the Internet and in Parliament against the Bill.

Since then, I’ve seen eye to eye with him on issues such as David Davis’s resignation over civil liberties and the lack of quality in Parliament’s law making process.

But for some time, I’ve been distressed by his view on climate change. Unlike David Cameron, John Redwood seems to be hiding from reality. Rather than accepting our predicament, and using his other political principles to work out how to fix it, he uses weasel words to avoid saying whether he believes or denies.

For a while I accepted this, and tried to point him to evidence he might listen to in the comments of his blog. For example, Confederation of British Industry reports on climate change (“Our changing climate is a threat to the way we live and work. Building a low-carbon economy requires government, businesses and consumers to work together, but we are not doing enough quickly enough.”).

Finally I was tipped over the edge, and challenged him to say whether he thought climate change was happening or not. It seems others have asked him the same thing, as he replied in full.

The warmists and their Ministers need to set out in detail their case to the public. They need to show that

1. The world is warming. Some temperature series show no warming in the last decade, and a cooler period after the war until the 1970s.
2. That warming comes from rising CO2 levels
3. That past periods of warming prior to industrialisation in both historical and geological time were caused by processes and events that do not apply today
4. That the man made element of increasing CO2 is the bit that matters and will cause unacceptable warming
5. That it makes more sense to try to stop the CO2 increases and the warming, than to invest in ways of handling the adverse consequences
6. That taxing and regulating is a better way to change human behaviour than incentives and technology

Even in the full article, John Redwood still doesn’t set out his view. He doesn’t say what he thinks on any of points 1 – 6, or why. I think that he is a climate change denier, but that he isn’t very confident about it. He doesn’t want to admit it in public, then find out he was wrong later in life.
No matter, his old blog posts are still a smoking gun, that will show that he was indecisive, that he didn’t lead when it mattered.

Yes, John is correct that warmists need to show 1 – 6 above. They’ve done so in numerous scientific papers and fat books from the IPCC, as well as evidence you can see with your own eyes. However, it is also the case that denialists need to show the opposite:

Actually John, the denialists and their supports in the old energy companies need to set out in detail their case to the public. They need to show that:

1. The world is not warming. When the north sea is melting, glaciers are retreating.
2. That warming comes from somewhere other than rising CO2 levels
3. That past periods of warming temperature prior to industrialisation in both historical and geological time were caused by processes and events that apply today
4. That the non-man made element of increasing CO2 is the bit that matters and is causing unacceptable warming
5. That it makes more sense to invest in ways of handling the adverse consequences than to try to stop the CO2 increases and the warming
6. That “taxing and regulating” is what is being proposed, when it isn’t, it is creating incentives for the market to deploy existing technologies and create new ones.

b. That allowing for the growth of China and India, and the fundamental physical limit of easily accessible fossil fuel reserves, we will be able to continue using existing sources of fuel indefinitely, at cheap prices.
c. That in an unstable world, where Russia have cut of gas supplies to customers, and there is terrorism, we can continue to rely entirely on a complex supply chain of imported energy every winter.

The burden of proof is just as much on John’s shoulders to show we shouldn’t act to reduce carbon emissions, as mine to show that we should. It’s a risk based analysis.

The sad thing is that John’d be pretty good at working out what action to take to help British businesses make money by getting the world a new zero carbon energy system. He says sound things on related subjects, such as the need for flood prevention (the photo at top of this blog post is John discussing flooding with his constituents) and on making Government buildings energy efficient. Heck, he has recently posted on energy security.

All you have to do is admit to the evidence that climate change is a risk to our country, just as insurance companies do, and help us take out the ultimate insurance policy.

4 thoughts on “John Redwood is a climate change denier”