In the late 1890s – the story goes – an ordinary boy in southern India heard an uncle mention the name of this holy mountain.

Just this, just the name, started pulling him to it. The mountain is meant to be, literally, an incarnation of the deity Shiva.

Then, a while later, for no apparent reason, the boy had a sudden spiritual awakening on the nature of death. In final frustration during some pointless grammar exercises, he left home, headed for the mountain. He stayed there for the rest of his life.

Last month I arrived at the town next to the mountain. Tiruvannamalai!

I found, more than a century later, the flourishing ashram that the boy had started (full biography). Popular with Indians and Westerners. There are meditation halls and a cow farm.

I stopped for a while by this doorway, to listen with everyone else casually, peacefully, seriously to a tape recording of tracts by Sri Ramana Maharshi, the boy’s name when he became a guru. 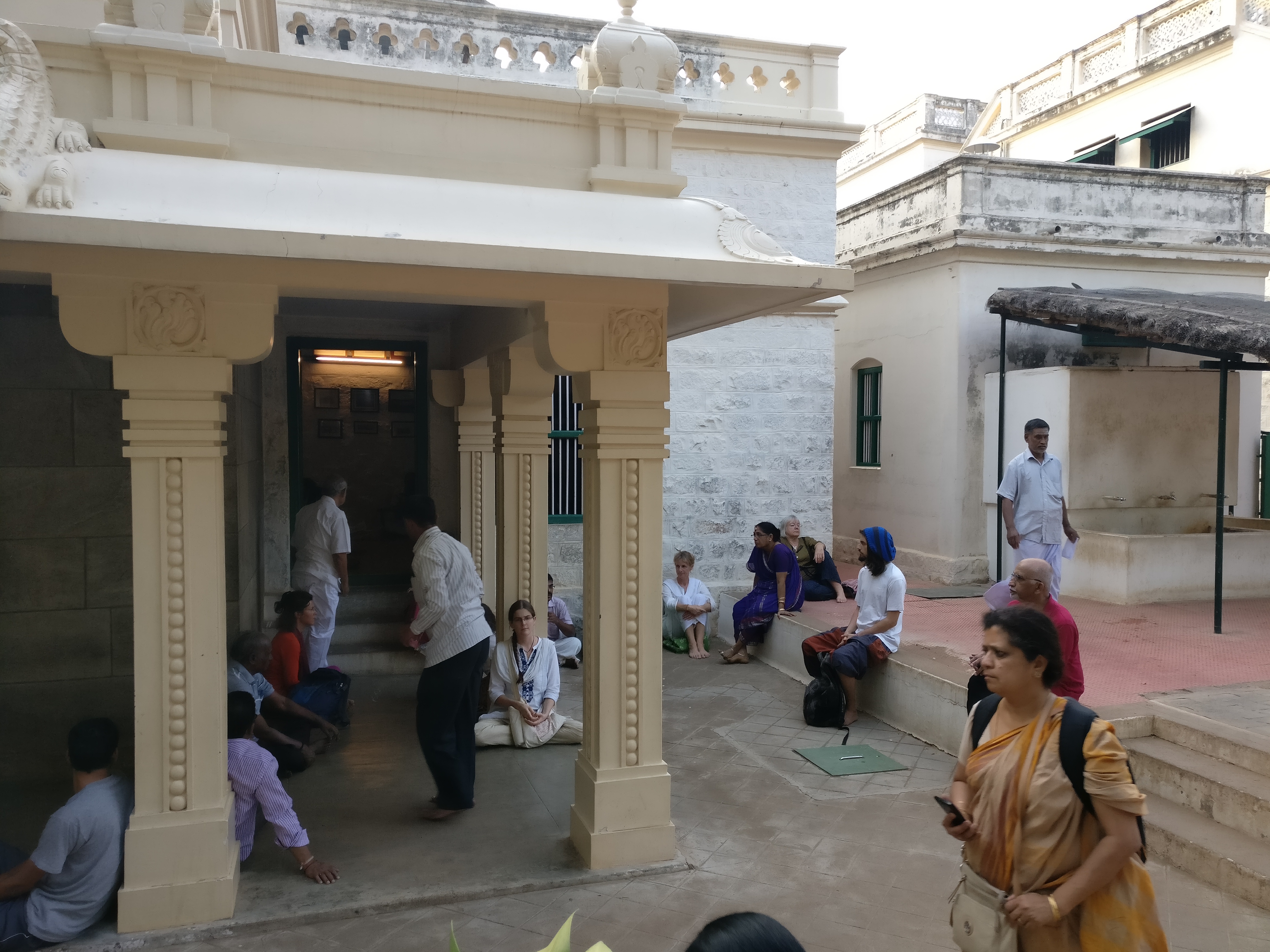 The tracts were giving details of a Hindu mythos. Quite intelligent, fairly abstract and almost Buddhist in their nature. Some Hindu permanent soul details I didn’t take to. Well told, easy to absorb as they were the answers to questions Westerners had asked Ramana in person.

The next morning I woke well before dawn, too early for the main town temple that I had come for to be open. As if drawn by forces unknown to me, I started to climb the mountain. It rises 2617 feet above sea level. A guide appeared to help me.

We climbed all morning. I’d been ill. I was shattered. 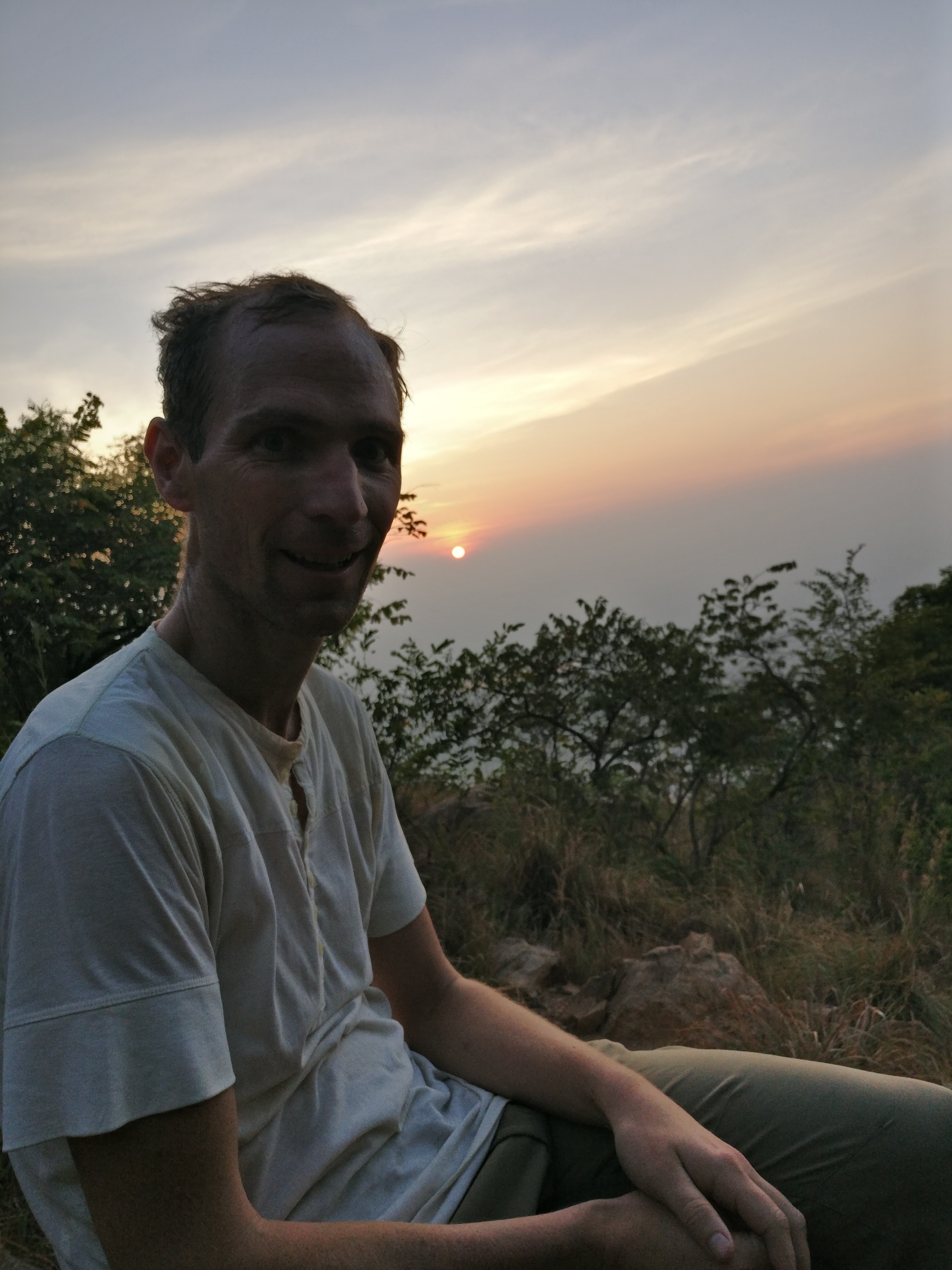 We emerged to this view – the mountain stood proudly alone. 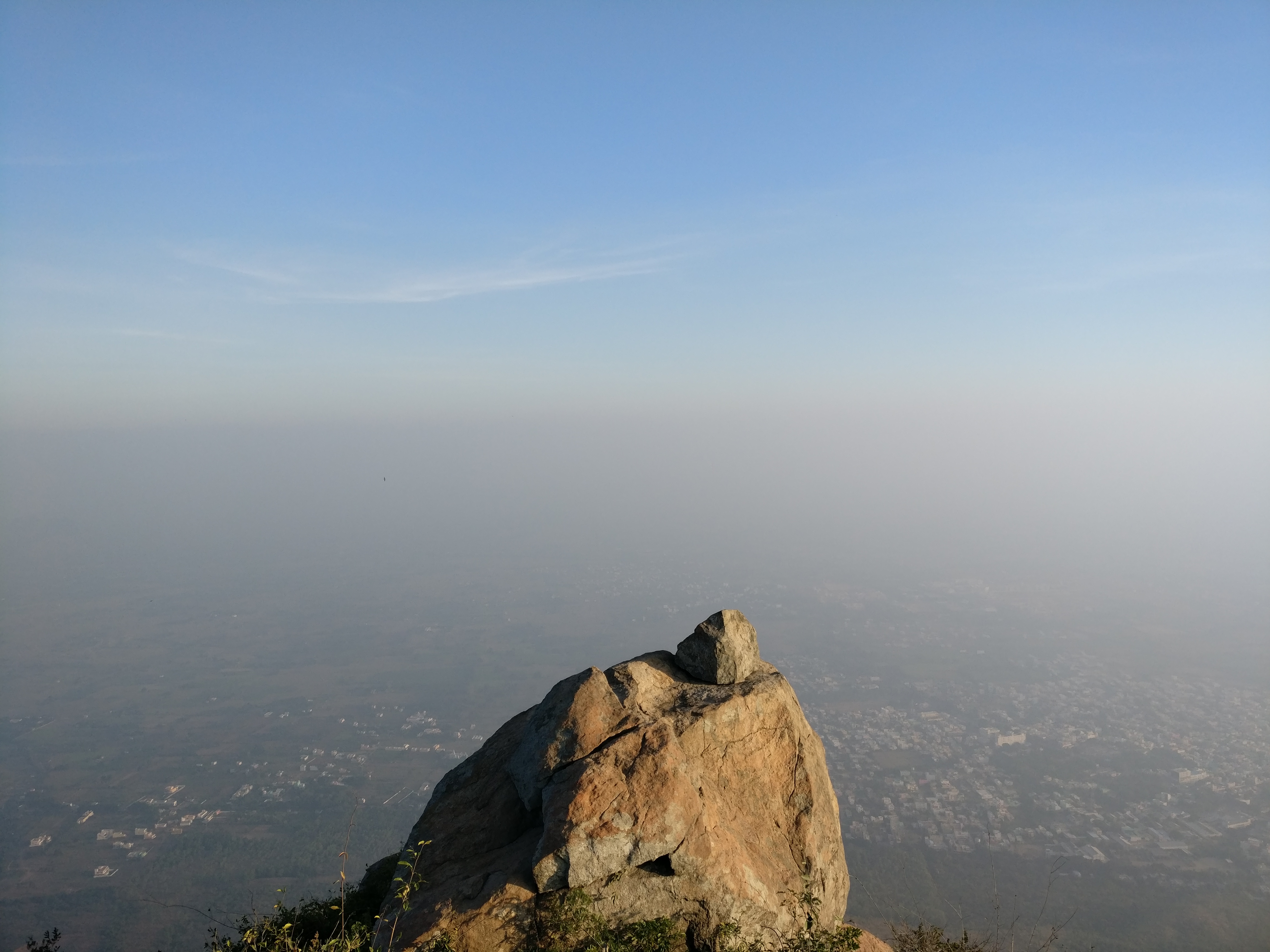 I helped this man rub milk into the rock here. I’d no idea why. 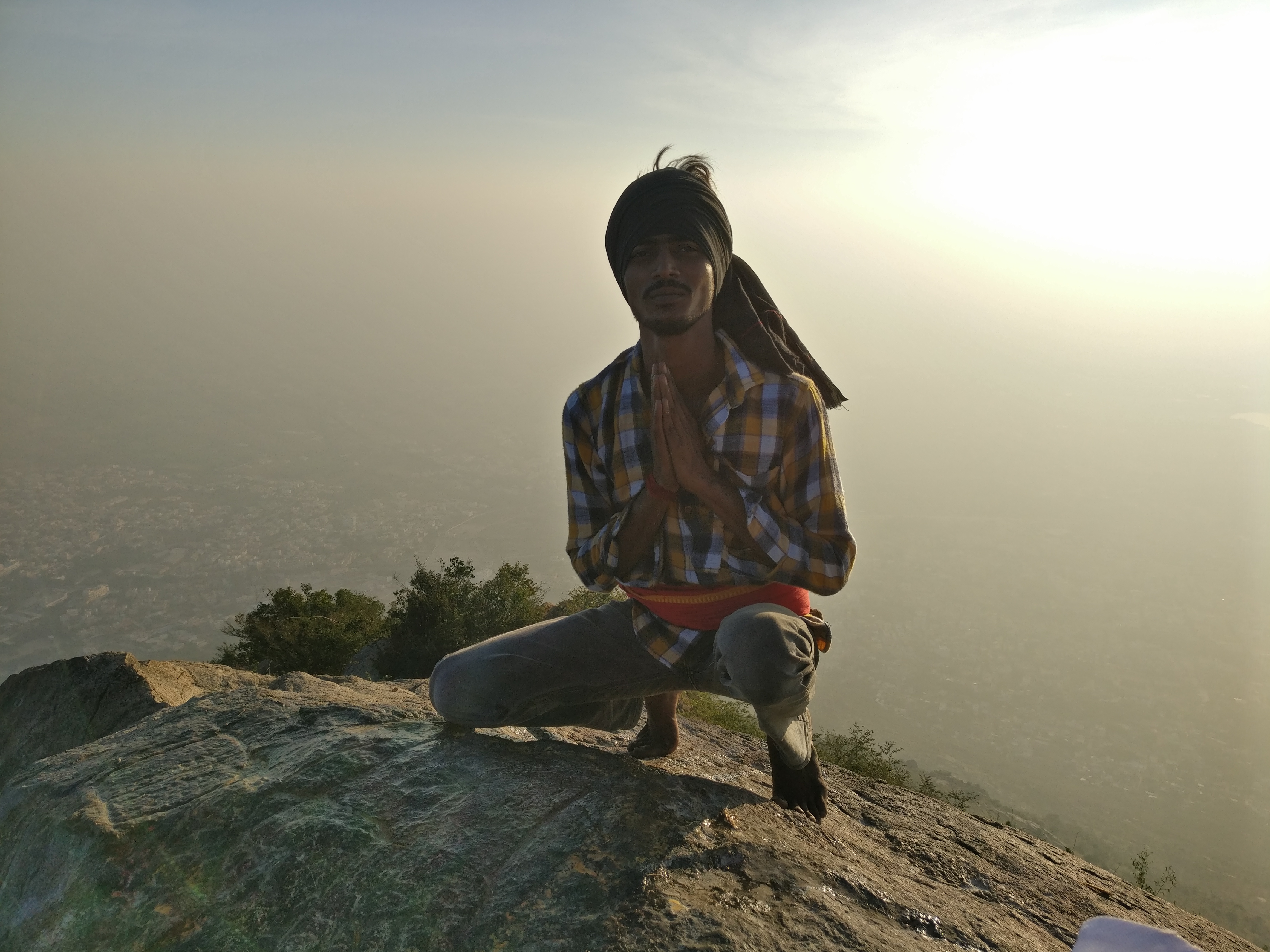 Bare foot, my guide and I made our way round to a tiny cave. Puja (prayer) paraphernalia had been left there – we left a few rupees to pay for refreshing it.

Yellow powder to daub on my head and rub into the lingam. 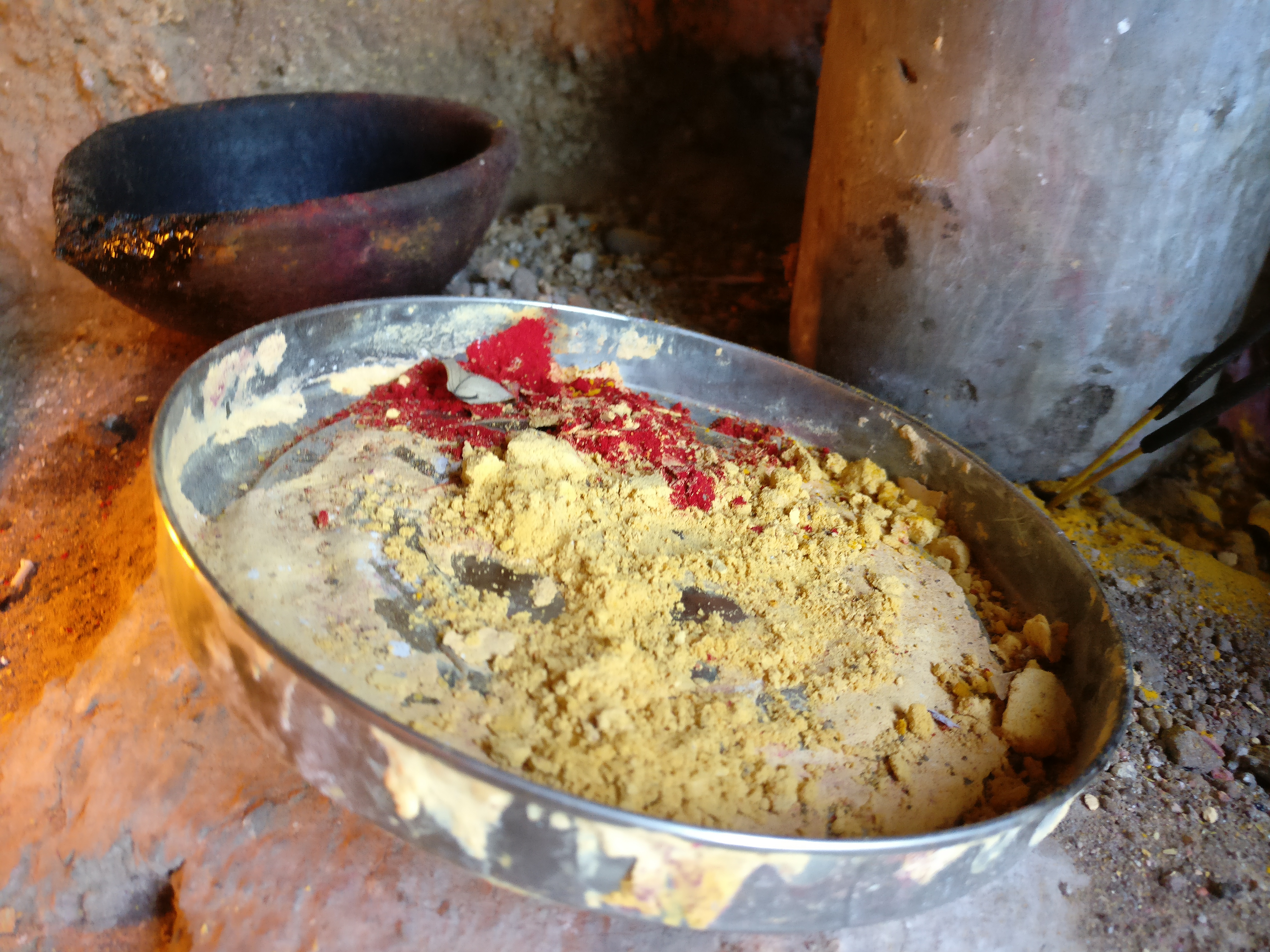 An oil lamp to ritually light. 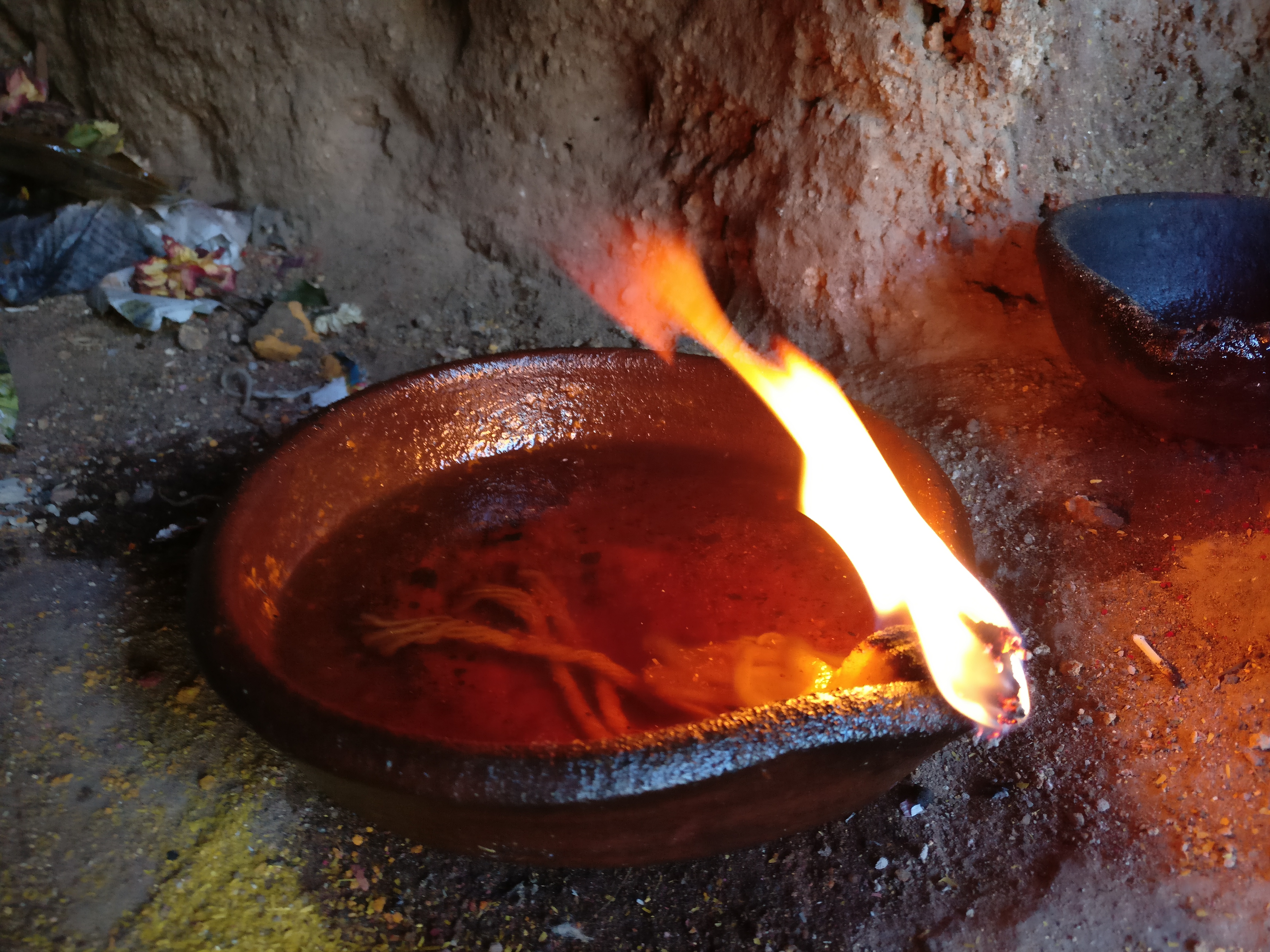 A lingam of Shiva – the mountain/god – to ponder. 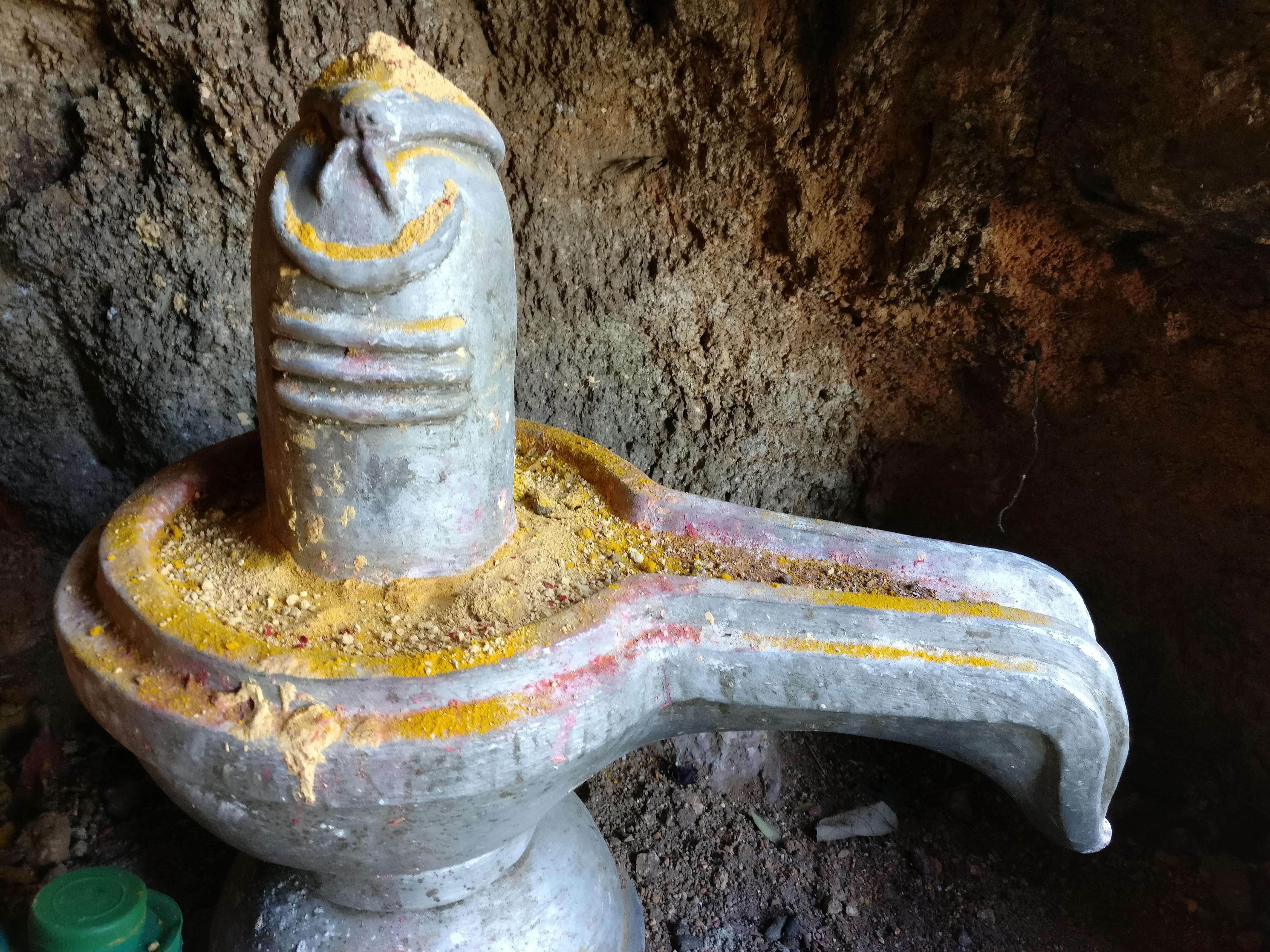 I sat a while cross legged, taking in the visceral, messy feel of these objects. My guide left me a while, he wanted to have a smoke. I fell asleep I think, or jumped some mental state, suddenly jolting awake.

Later I found that the ancient texts say…

All stones in that place Arunachala are lingams. It is indeed the abode of Lord Siva. … to fall asleep there is to be absorbed in samadhi, beyond the mind’s delusion.

Back outside, this man had finished making his puja of flowers where we’d put the milk. We paid him a few rupees. 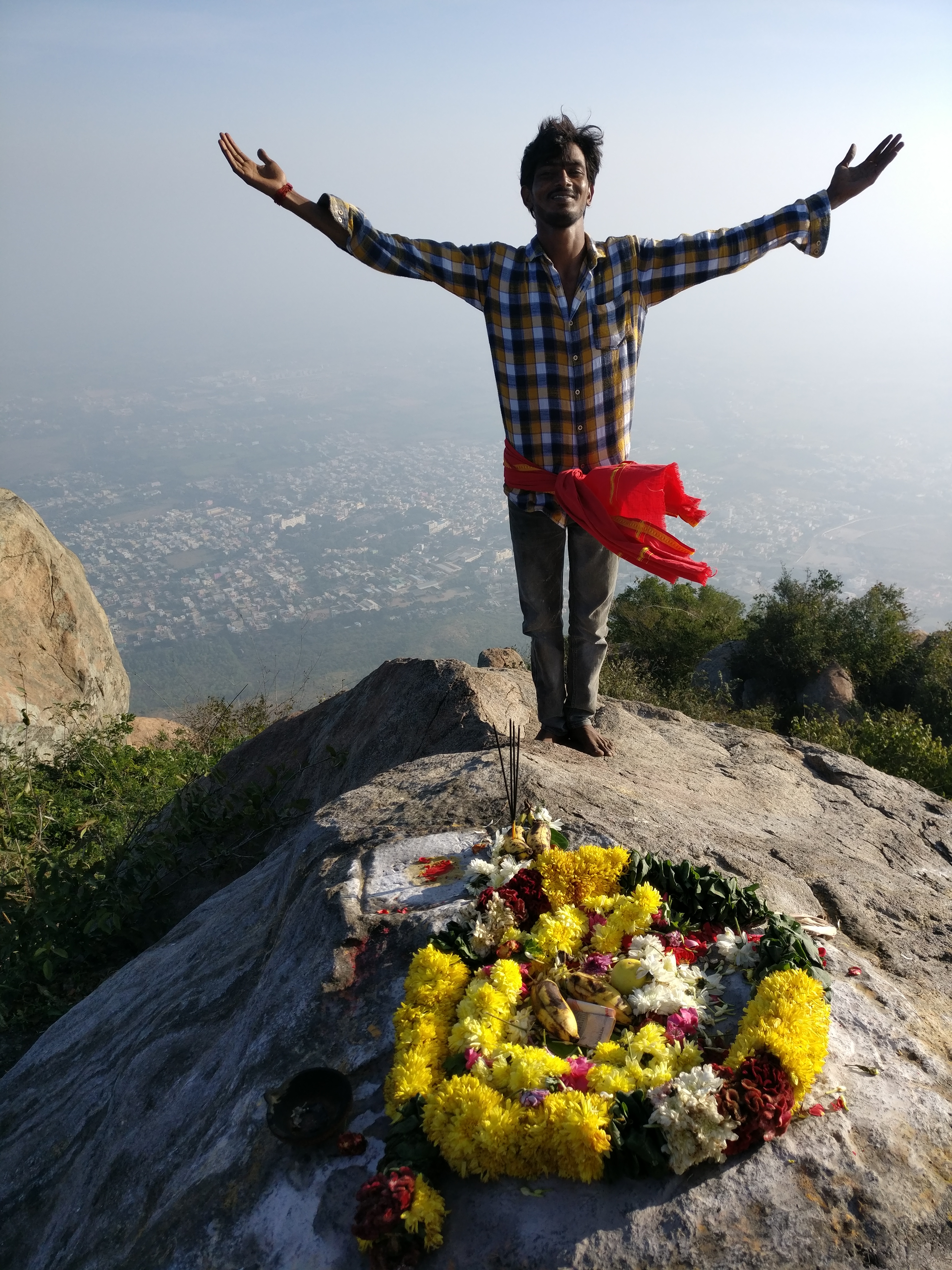 In the only hut up there, we had tea cooked on a fire. 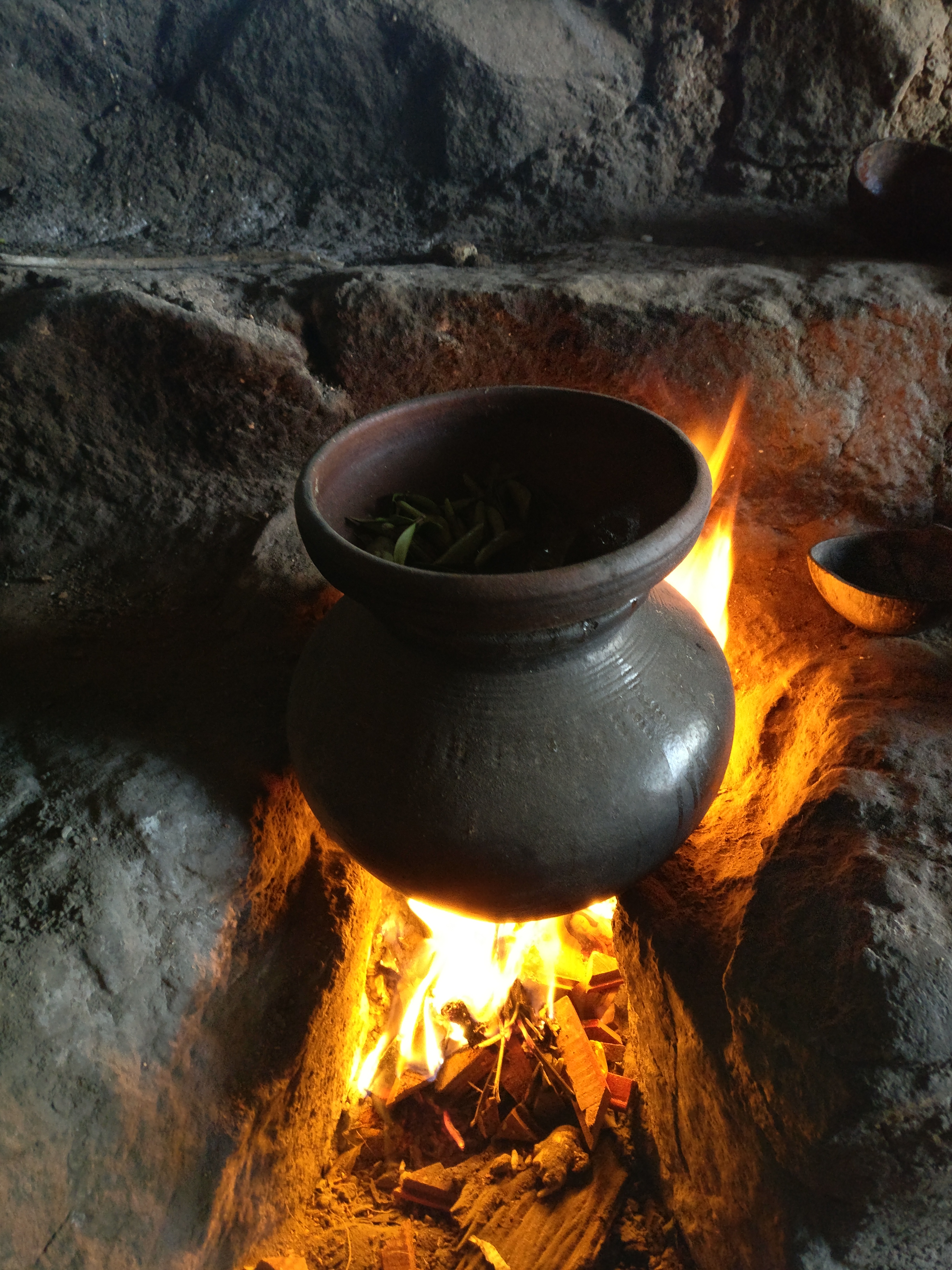 I bounced down the mountain, now beamish. I don’t know why. 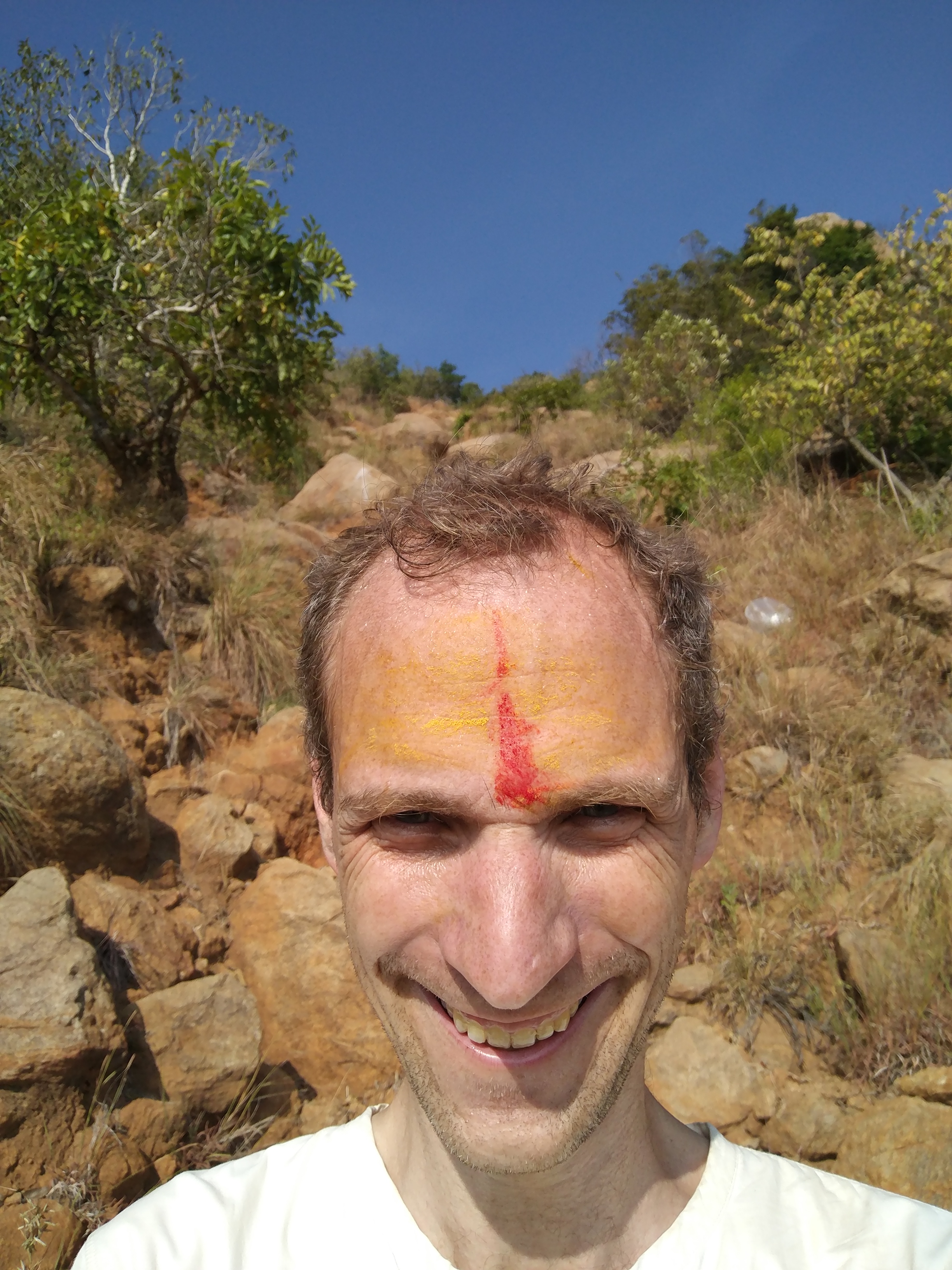 I paid my guide (using a note a friend, during a conversation about meditation, had given me to help me out with demonetisation – thank you!). He turned out to be a sculptor. I left him, carving an image of Ganesh. 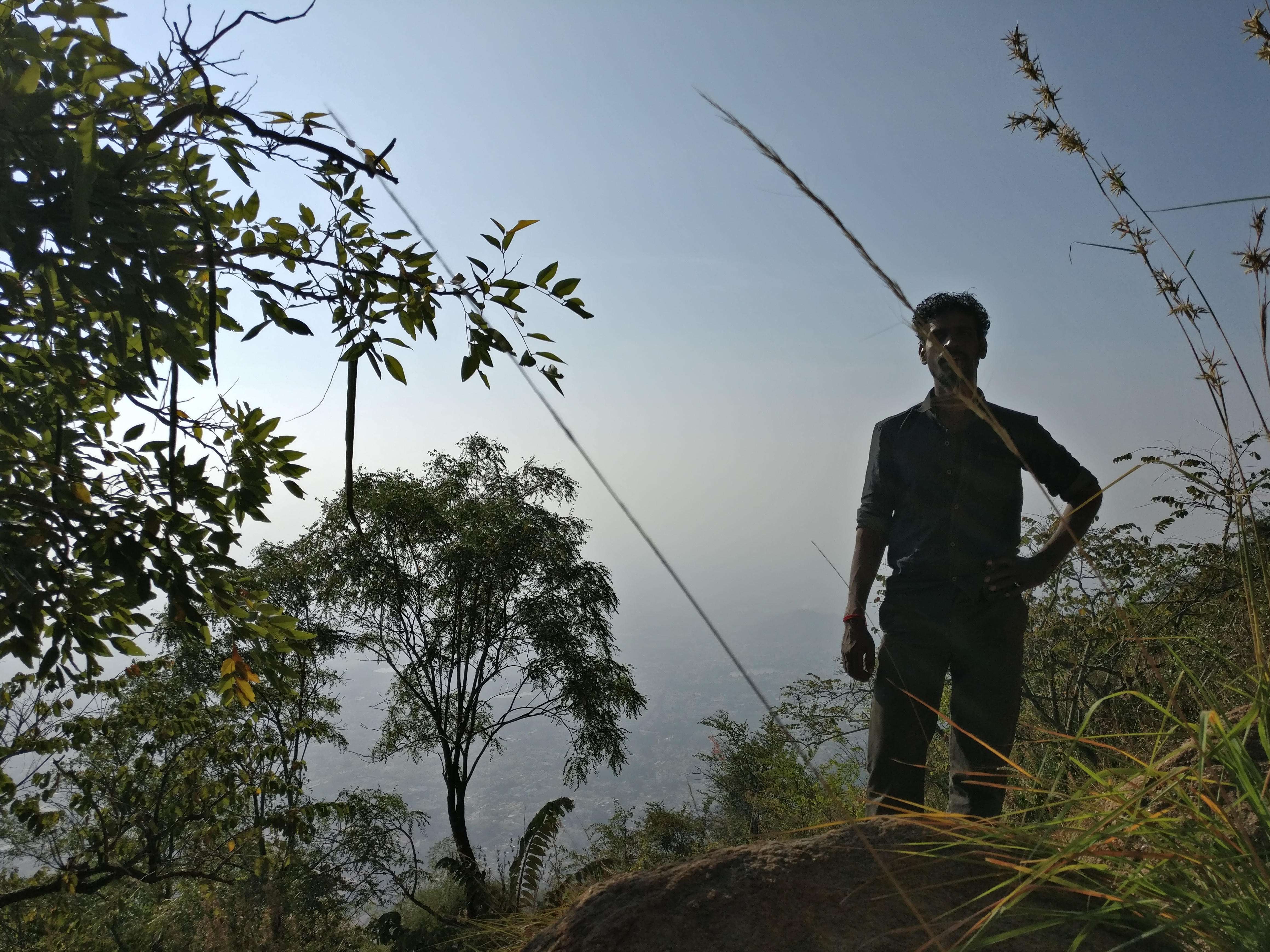 I believe nothing, Hinduism has no draw to me. And yet… I love these holy mountains.